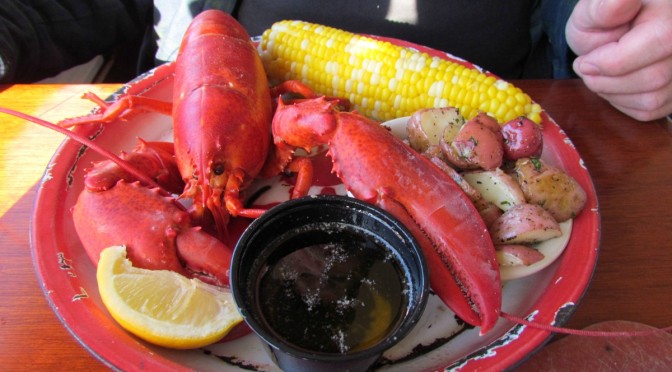 I’m a firm believer that I should make an attempt to try out life as a local where ever I end up.  So with that said, apparently those that live in Maine have a thing for lobsters.  Which means I will have to make the sacrifice and eat a lobster meal.

It will be tough, but we will just have to do it… 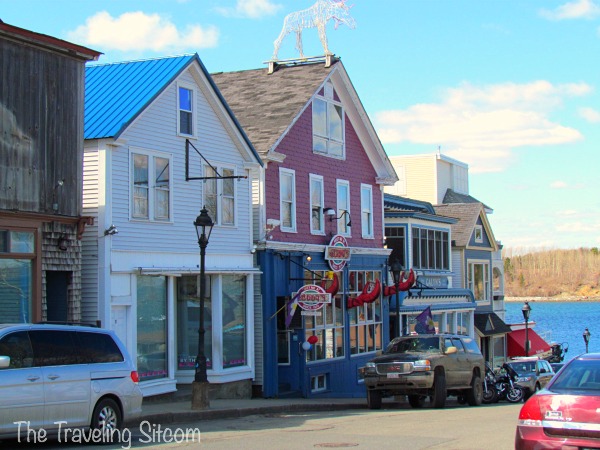 So where to go?  Well, I could name fifty restaurants in the Bar Harbor area and hundreds more along the Maine coast that sell lobster.  You see signs of that red pinchered thing everywhere. 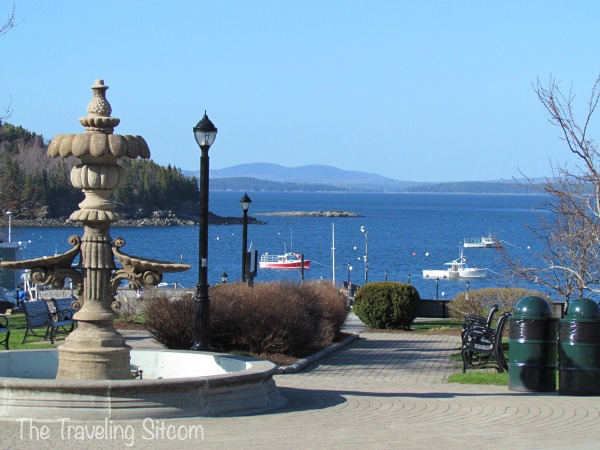 See all those white floats in the water just off the shore?  Everyone of those is a lobster trap.  They go as far as you can see in all directions.  A passing lobster just doesn’t have a chance in Bar Harbor. 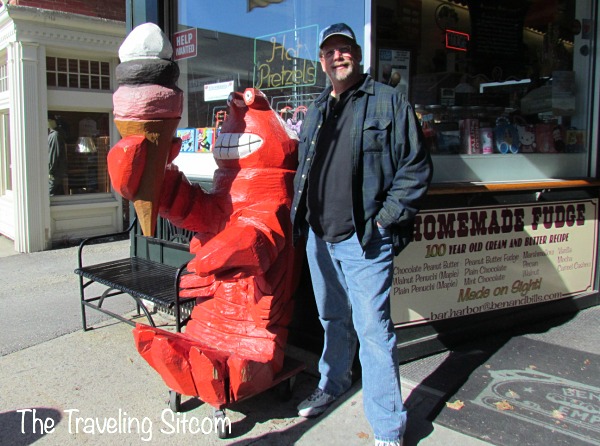 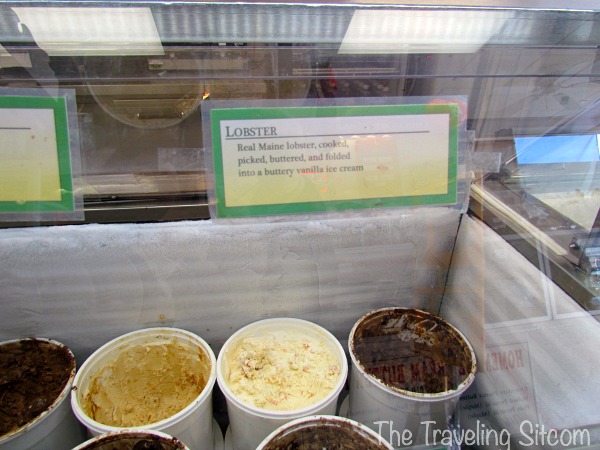 Even Lobster Ice cream!  And yes, it had real chunks of lobster in it. Ben & Bill’s Chocolate Emporium located on Main Street in Bar Harbor has lots of fun flavors in their homemade ice cream selection including Dulce de Leche, Bubblegum, (KGB) Kahlua and Bailey’s Irish Cream base ice cream with a Grand Marnier fudge swirl, Rum Raisin, Root Beer Float, and many more!

My personal goal is to try each flavor before the summer is out.  Will let you know how that goes!  For the record- I  have already tried the Lobster Ice cream.  It was ummm…. interesting.

Dave just asked me about that diet I was planning to go on… Ice cream has lots of calcium, right? 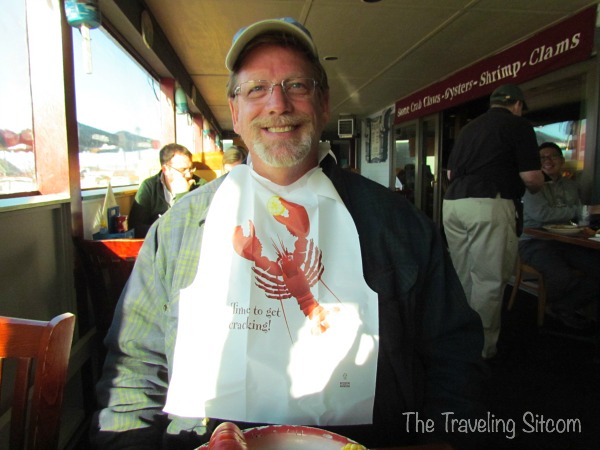 And speaking of diet, let’s take in a bit of seafood, why don’t we?  For our first stab at eating a real lobster, we checked out Stewman’s Lobster Pound.

Ever eaten a whole lobster?  Well, it is an adventure.  Our waitress recognized the slightly alarmed looks on our faces as these red crustaceans were set in front of us and took us under her wing.  She showed us how to break the the claws off, and then how to twist the tail off the body to get to the tail meat.

After warning us that we needed to remove the “chute” in the tail, she left us to our adventure.

Okay.  I’m not thrilled about looking for a “chute”, but here goes…

So, here is what we learned.  DO NOT twist the tail off the body while holding it over your plate!  Bleh!  There  is green stuff that will fall onto your plate.  This is the lobster tomalley, which is apparently the lobster’s liver and pancreas.  Many people, especially in New England, consider it a delicacy, and eat it along with the rest of the lobster.

We did not.  I will only take this “eating as the locals do” just so far!

But we both did agree that the lobsters were delicious.  Especially the tail and claws.  Now that we have officially been broken in, we plan on trying a few more before we leave the area.  After all, we are experts now! 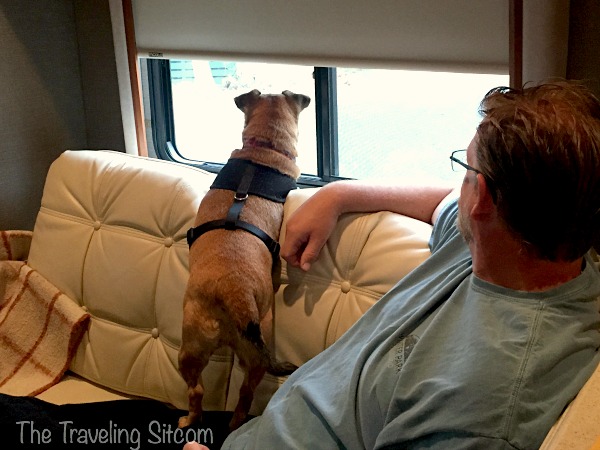 On the home front, the dogs are getting used to their new surroundings.  Ralph has discovered red squirrels (which are the pretty red cousins to his nemesis the gray squirrel in Georgia).  Turns out that they are not afraid of him either.

Ralph now spends an enormous amount of time staring out the window looking for a squirrel sighting so that he can bark like a girl. 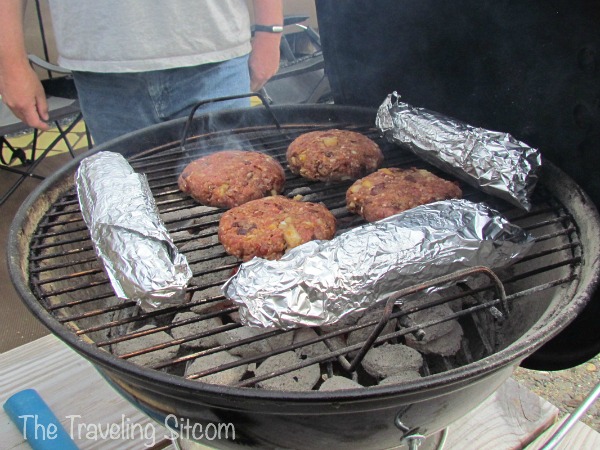 And Dave is busy breaking in the grill.  This week we made Spicy Chipotle Burgers and Grilled Corn on the Cob.

It wasn’t as exciting as the lobster, but it certainly was delicious.

5 thoughts on “When in Maine, we eat Lobster!”