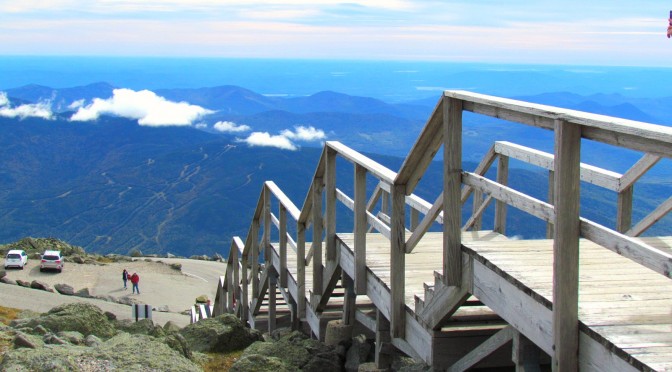 We officially left the state of Maine on October 2.  What a fabulous six months we had!  We met so many wonderful people and enjoyed an amazingly beautiful area of the country.  And now the adventure continues! 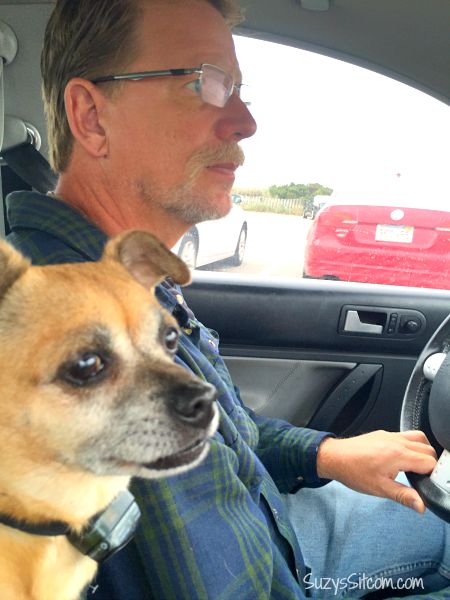 Dave wanted to check out the White Mountains in New Hampshire.  Faith was much more interested in seeing if there were any roadside hotdog stands.

Since Dave was driving, those hotdog stands would have to wait until another day… 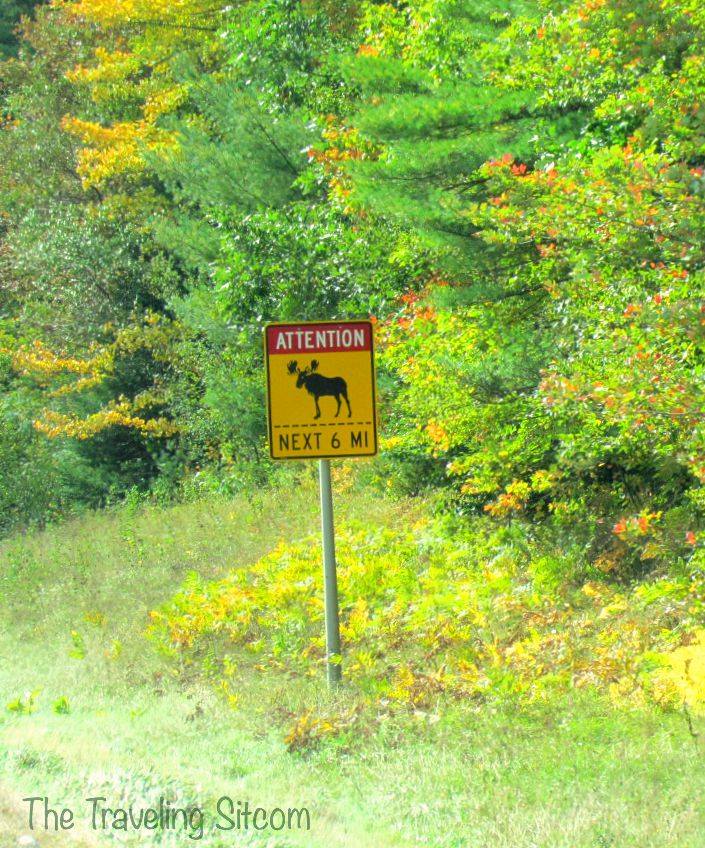 It wasn’t too long and we left the state of Maine and all it’s Moose Crossing signs behind.  Did we ever see a moose?  Well, no.  Lived there six months and the closest I got to a moose was this sign. 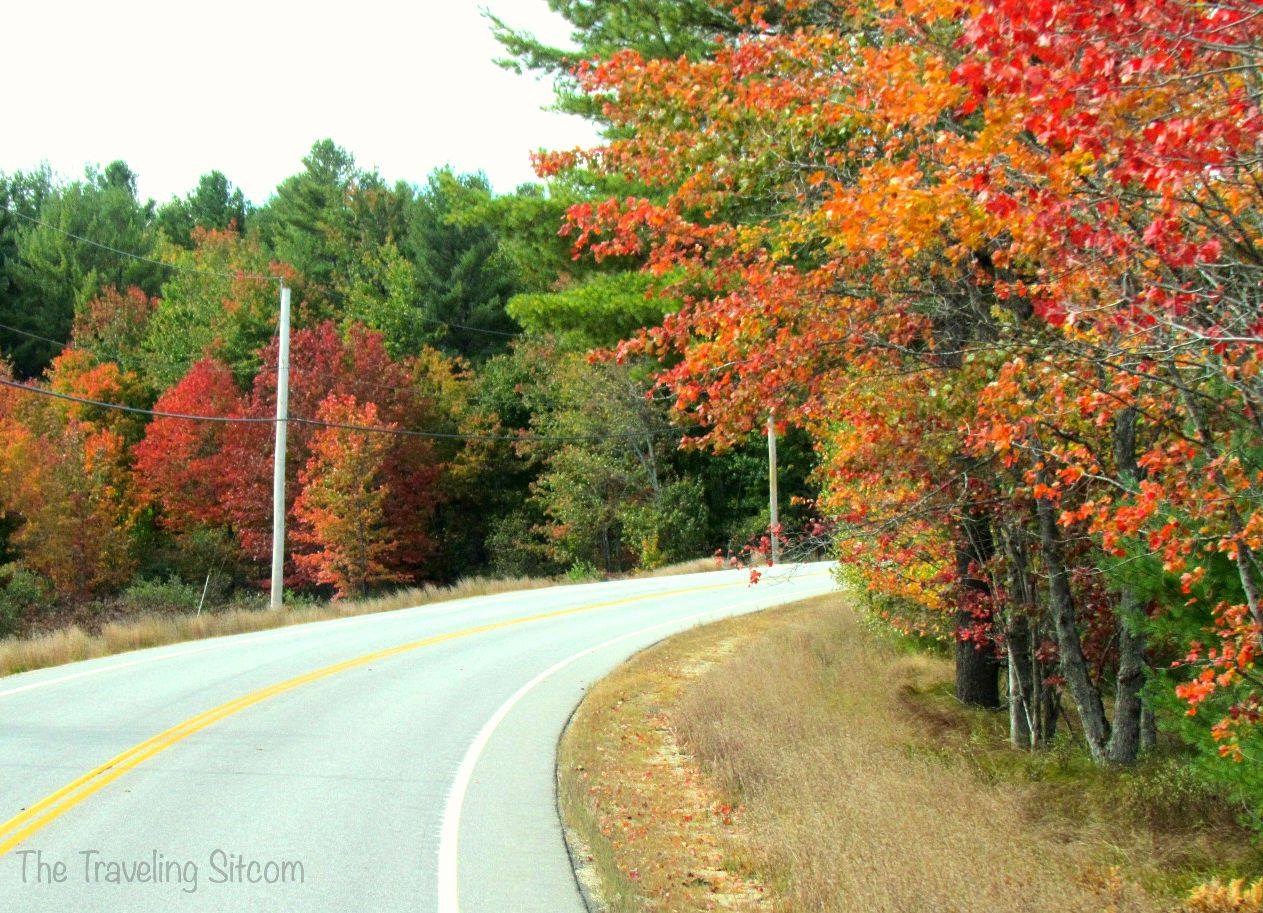 And I was a bit worried that I wouldn’t see a Fall leaf change too.  Fortunately, we got to see plenty of colorful trees on the way to New Hampshire.   Fall is definitely here! 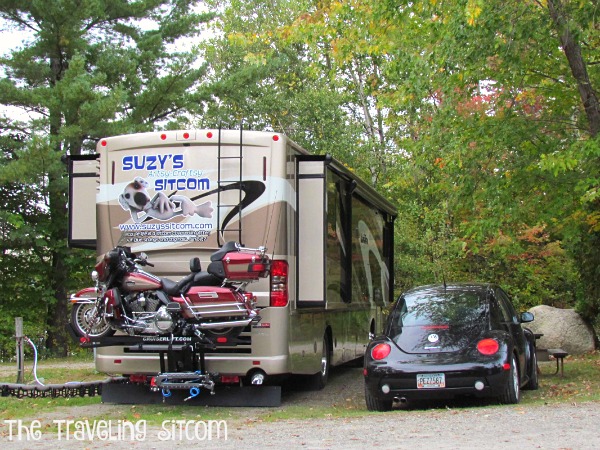 Dave wanted to ride the Cog Railway to the top of Mount Washington.  So, we chose the closest KOA, which happened to be Twin Mountain KOA.  This was a beautifully maintained privately owned campground at the base of the White Mountains.

We enjoyed talking to the owners who told us that they purchased this particular campground sight unseen several years ago.  Since then, they had done many upgrades including beautiful private tent areas and even a caboose as a “cabin” rental! 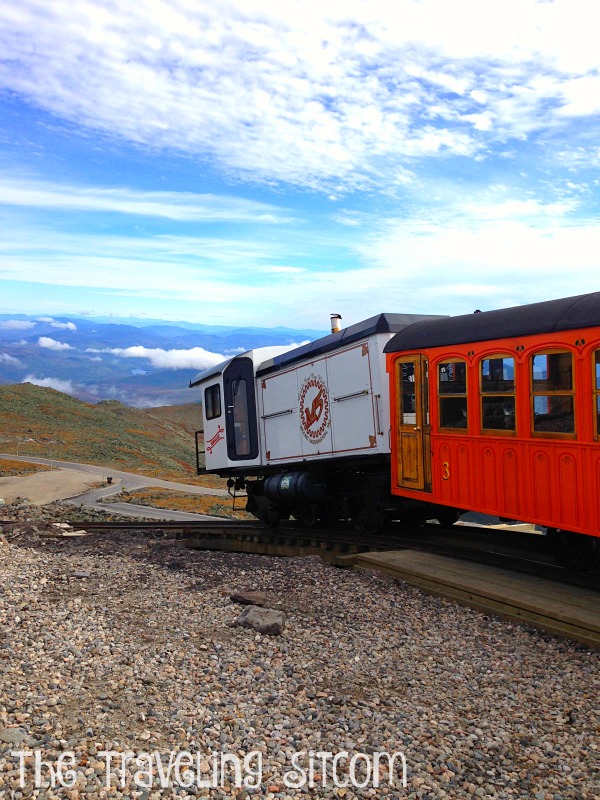 So what the heck is the Cog Railway?

It is the world’s first mountain climbing rack and pinion railway.  It is the second steepest railway in the world with an average grade of over 25%, and a maximum grade of 37.41%!

The three mile trek up Mount Washington takes about 40 minutes as you ascend to the summit peak at 6,288 feet above sea level. 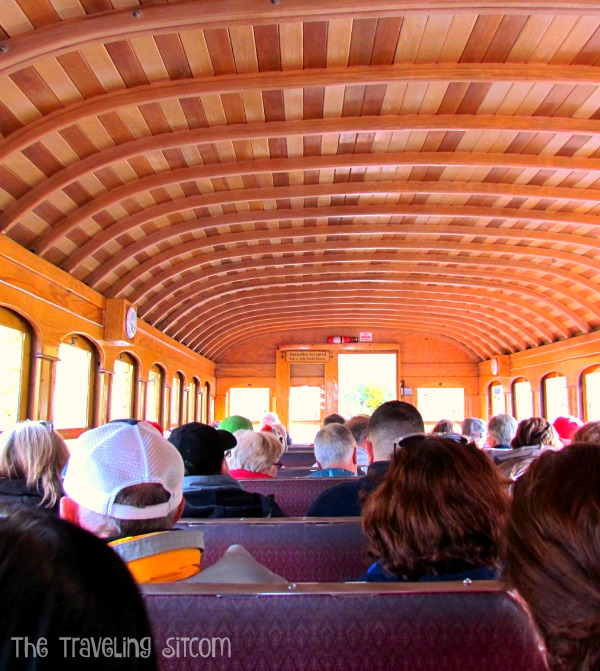 The Cog Railway originated in 1852 when after becoming lost near the summit of Mount Washington, Sylvester Marsh decided to create a better way for people to reach the highest mountain peak in the Northeast.

One Hundred and Forty Years later, The Mount Washington Cog Railway is a National Historic Engineering Landmark!   The vintage steam engines, replica coaches and biodiesel locomotives are well worth the visit.

We loved the running commentary from the brakeman on board who filled us in on the history of the railway, the mountain, and other fun facts.  And then there was the cool optical illusion of the trees and structures along the side of the tracks being extremely tilted.  (When in fact it was us that was tilted!) 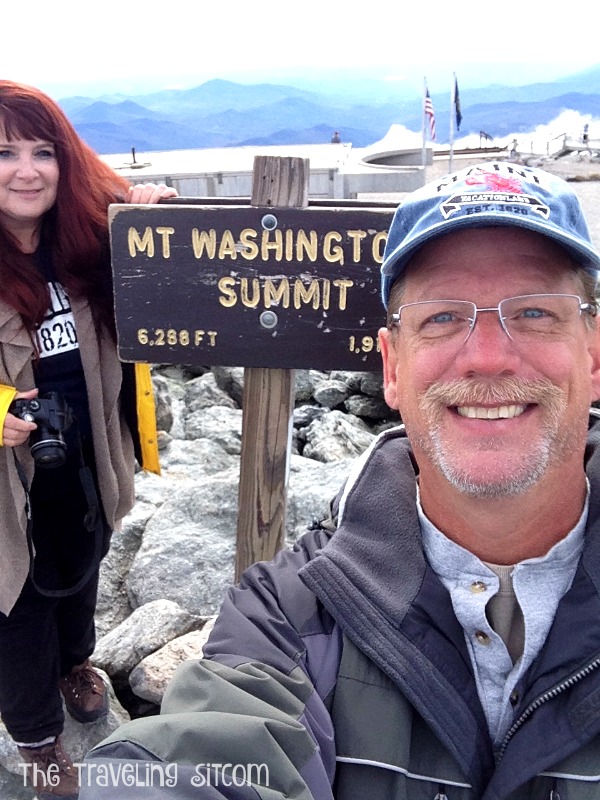 And then there was Mount Washington!  The summit was cold and clear and we could see for miles! 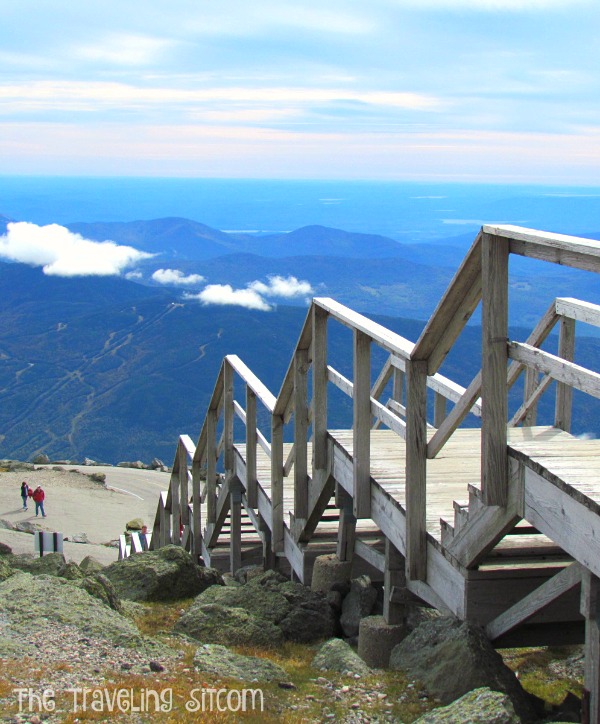 In fact, in the photo above if you look where the sky meets the land on the horizon, there is a strip of blue there.  That is the Atlantic ocean! 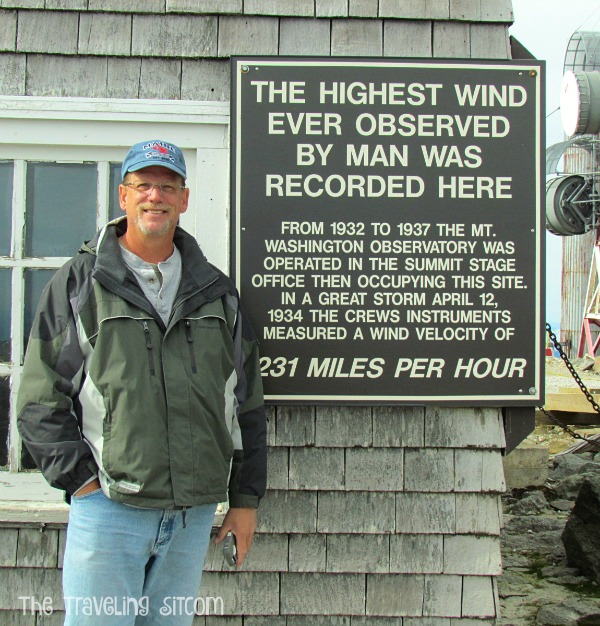 The mountain is famous for dangerously erratic weather. On the afternoon of April 12, 1934, the Mount Washington Observatory actually recorded a windspeed of 231 miles per hour (372 km/h) at the summit.  This was the world record for most of the 20th century.

Like most big mountains, it makes it’s own weather and conditions at the top are often poor.  We were fortunate to arrive on a clear day as more often than not, clouds cover the peak.

At peak of the mountain, there was a museum to enjoy which included an exhibit titled “Extreme Mount Washington“.  This video is a bit about the exhibit and the crazy weather that Mount Washington loves to share. 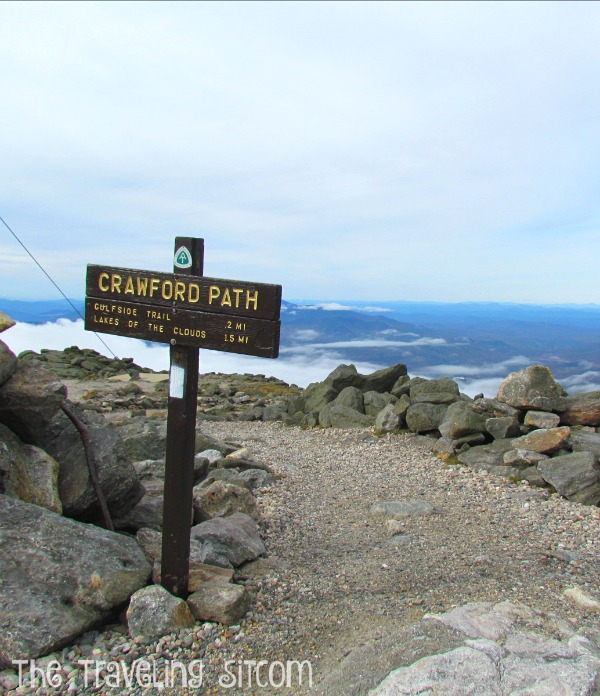 And here above the clouds is the Appalachian Trail!  One of things I’ve always wanted to do is take that trail from Georgia all the way to it’s end point in Maine on Mount Katahdin.  I didn’t realize that not only did you have to tackle that huge mountain in Maine, but you had one quiet a bit larger just a state away! 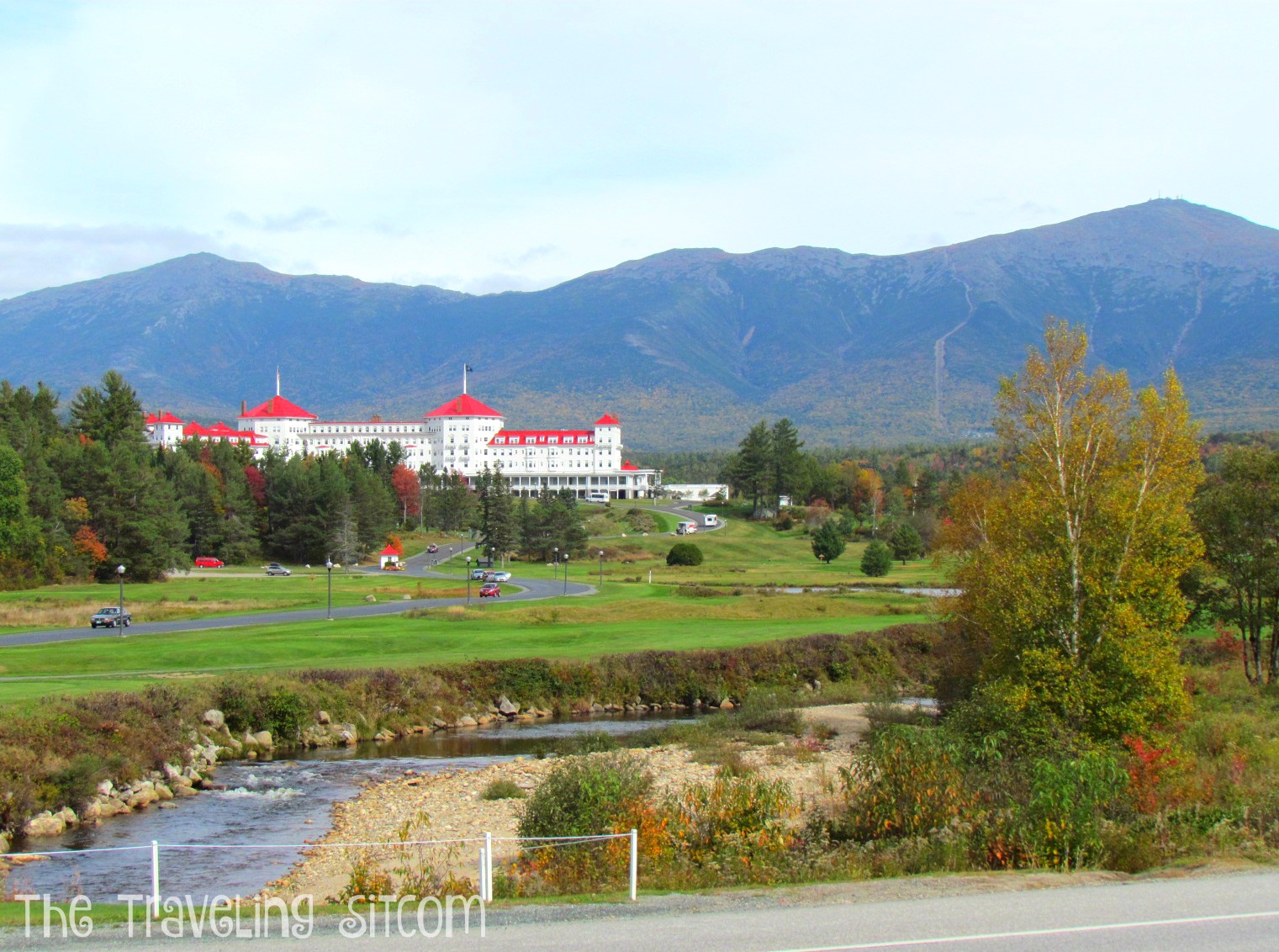 The state of New Hampshire dressed up and greeted us with beautiful leaves, amazing weather and a wonderful start to our trek heading south.

Dave has a good idea every now and then.  But don’t tell him I said so. 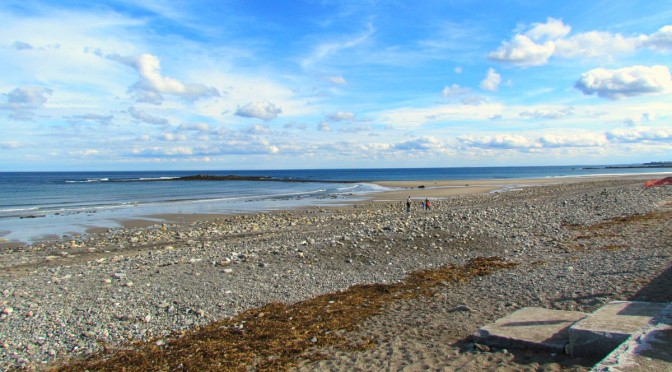 We decided to add another stop on our route to Maine in order to make the drive times less strenuous for Dave.  Seems that keeping the distance no longer than 320 miles was a perfect scenario for him.  So with that in mind, our next stop was a small campground in Salisbury, MA. 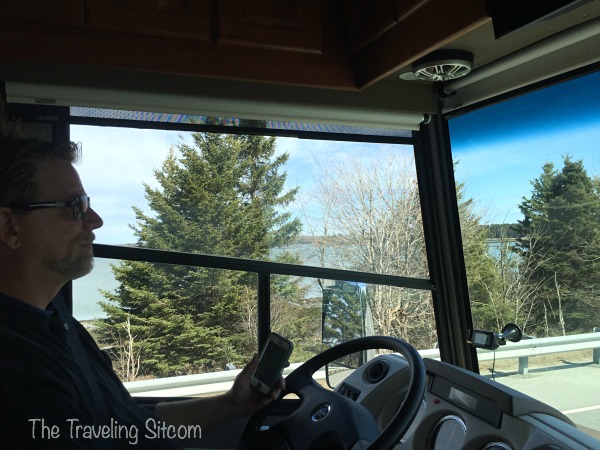 The weather?  Well, it was not cooperating.  Seems that skies are sunny unless we are hitching up the car and getting ready to hit the road.  It poured down rain on us as we prepared to leave Connecticut behind.

Fortunately there was sun waiting for us in Massachusetts. 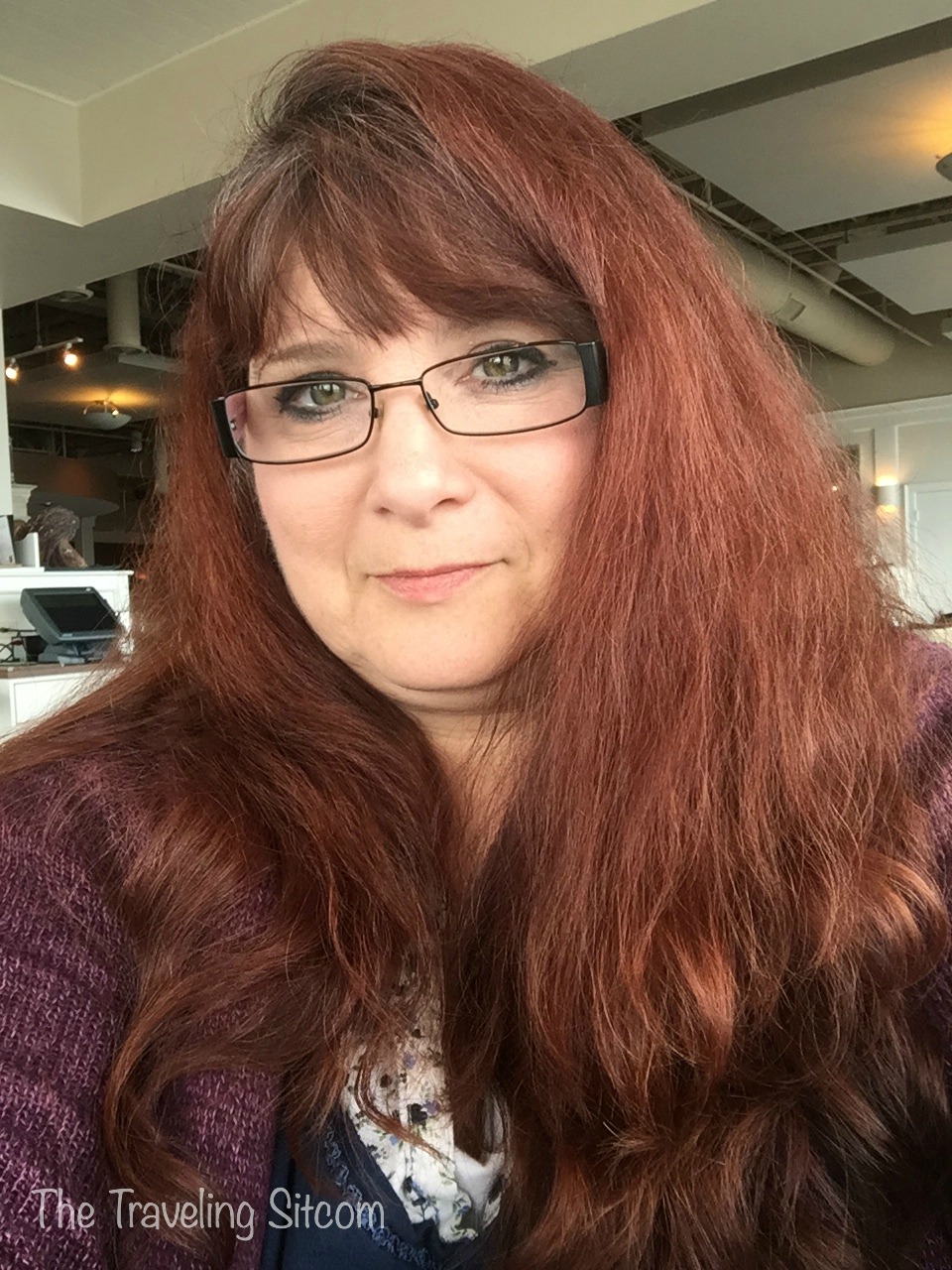 It was too late, though.  I officially had Rosanne Rosannadanna hair, much to Dave’s amusement.

Salisbury?  Well, because of the rainy weather, and the fact that we were only in town a day, we did not get to see a whole lot of it.  The community is a popular summer resort beach town situated on the Atlantic Ocean, north of Boston, right on the New Hampshire border. 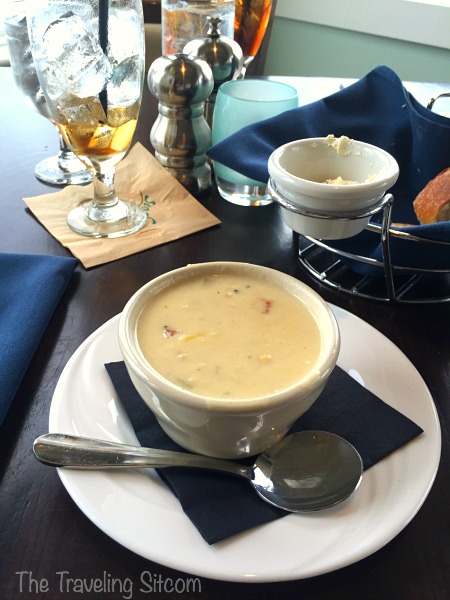 We can, however, recommend the Seaglass Restaurant, located right on the ocean in downtown Salisbury.  After a chilly, rainy day, a hot bowl of New England Clam Chowder certainly hit the spot.

And the great thing about the Seaglass Restaurant is the fact that you can sit and watch the ocean while enjoying your meal! 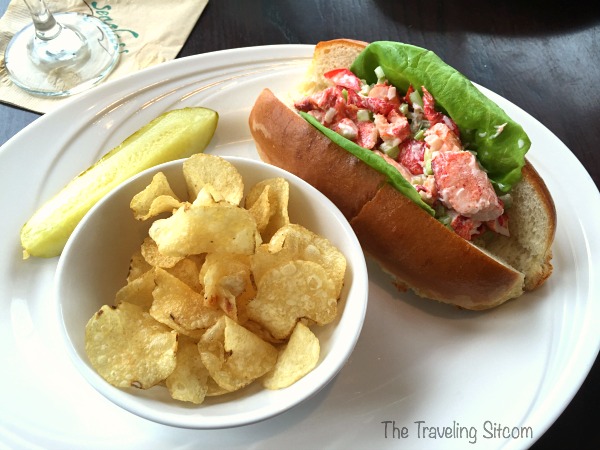 And this is what is called a Lobster Roll.  It is a mix of lobster, veggies and special sauce in a hotdog bun.  We will find out later that this particular item is hugely popular in New England. 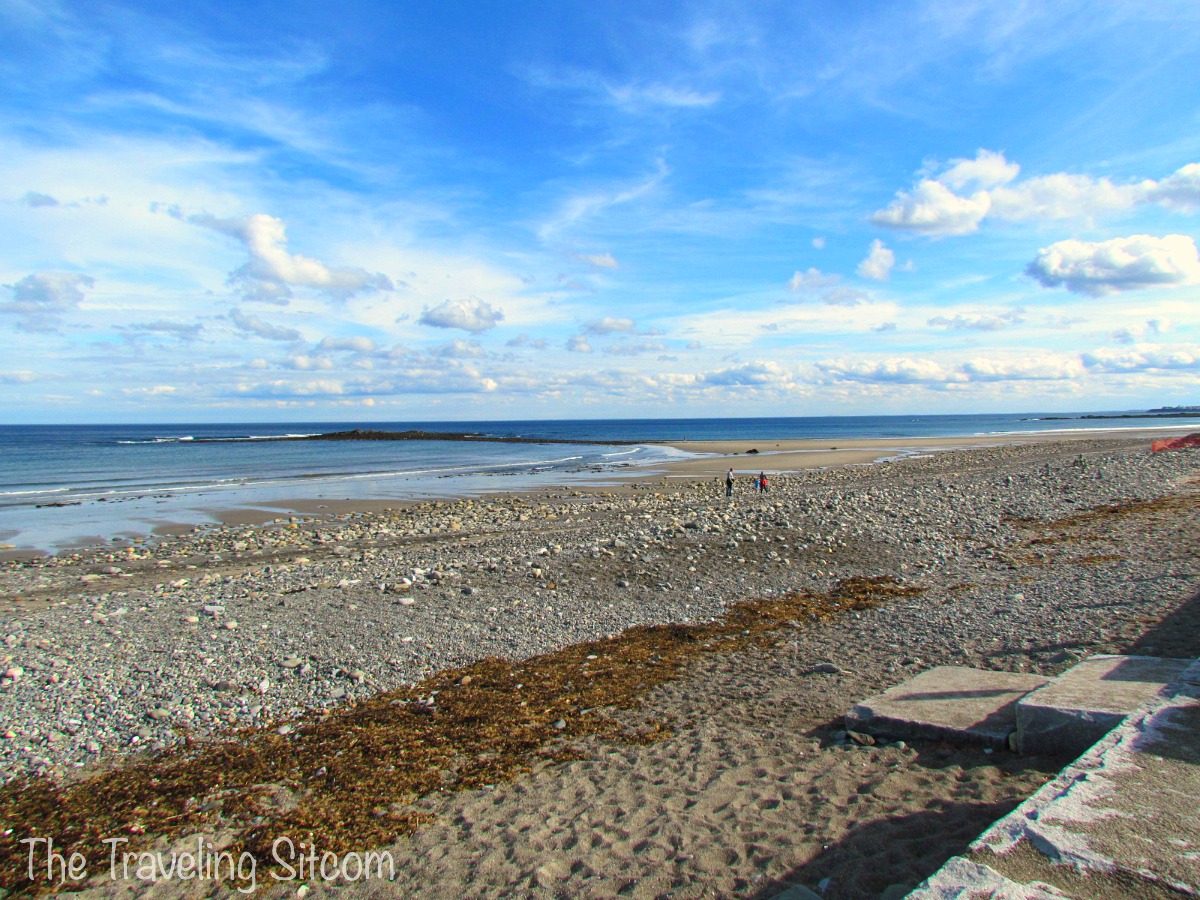 The sun came out the next day and as we headed north, we made a pitstop in the town of Hampton, NH.   What beautiful scenery! 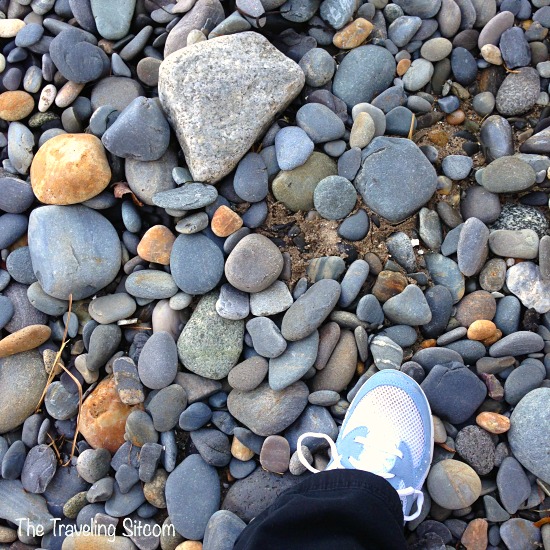 And just look at the rocks!  Yep, that is where my mind goes.  You can take a crafter anywhere, and they just see potential. 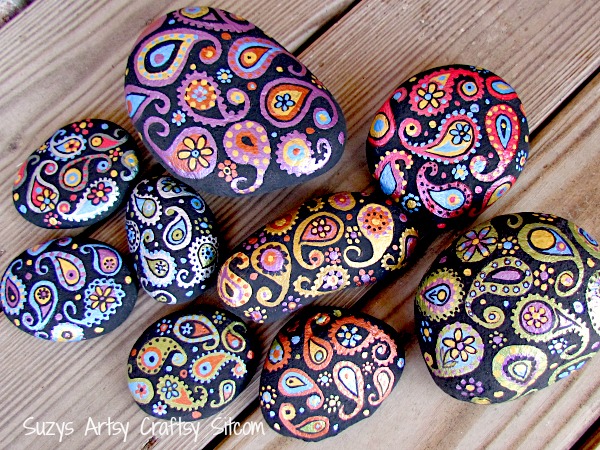 This is what I see!  Painted Paisley Stones – of course! 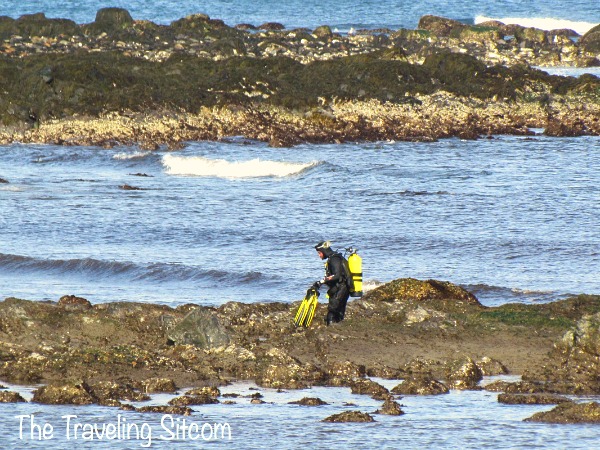 Hampton Beach was full of activity including this lone scuba diver. 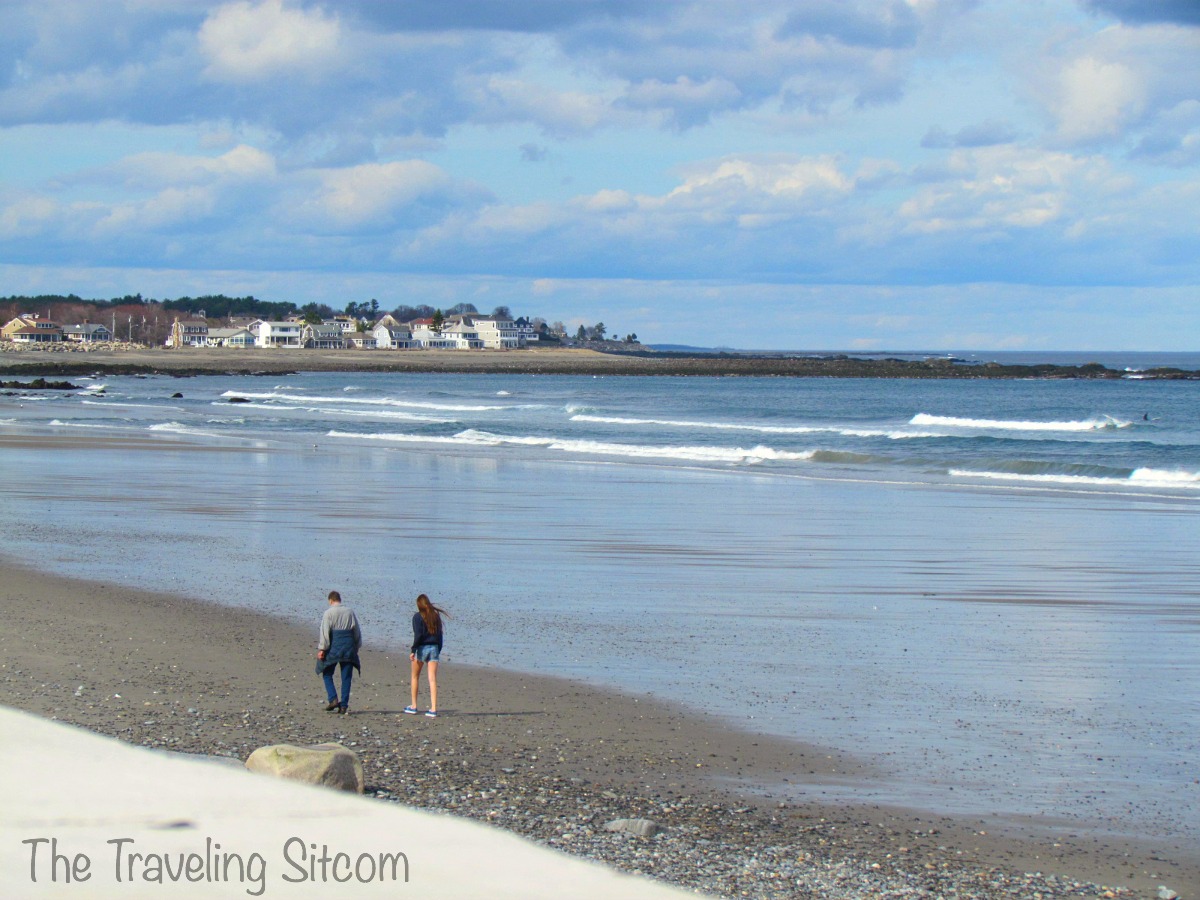 We noted that there is a RV park located right down the road from this beautiful spot.  Hampton Beach State Park has RV campsites right on the ocean.  The campground, with 28 sites, is open for reservations from Memorial Day weekend through Columbus Day weekend.

It is definitely a spot we will keep in mind if we are in the area when it is open.

So… our next stop is Bar Harbor, Maine!  We are excited and just a tad nervous to find out what is on the horizon.  See you there!