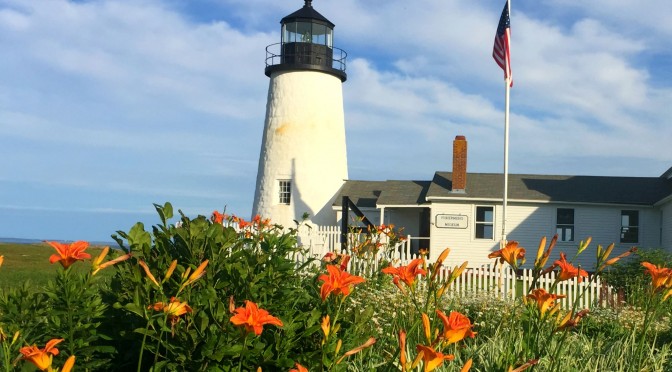 Our youngest daughter is getting married in November.  Since Dave has to walk her down the aisle, it was necessary this week to take a trip back into civilization and get measured for a tuxedo. 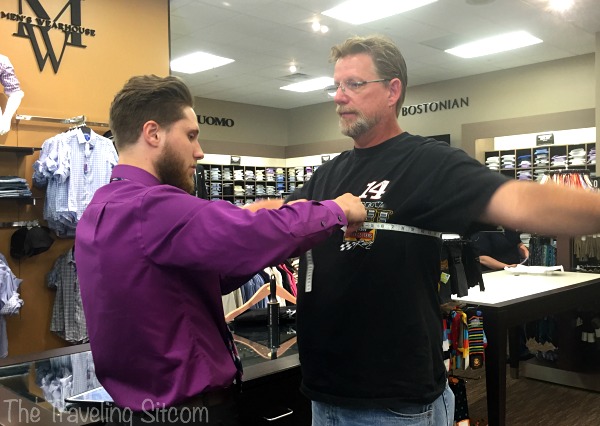 So we made the two hour drive south to Augusta, Maine, where the closest Men’s Wearhouse was.  We were not looking forward to the drive and the fact that it would take up a whole day off to accomplish.  A two hour drive for a fitting that took all of ten minutes…

Now what to do?

We decided that since we were in the general area, maybe we should check out Pemaquid Point Lighthouse.  After all, on the map it was just east of Augusta, and a trip up the coast would be beautiful! 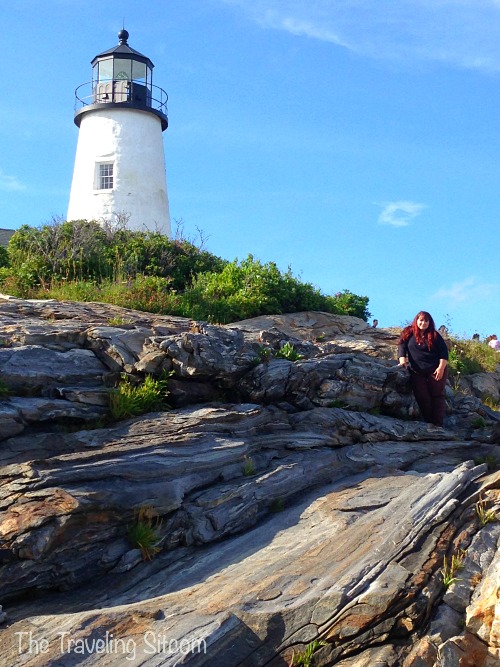 And the lighthouse was beautiful, of course.  We arrived after hours, so were not able to tour the inside, but were able to spend plenty of time enjoying the scenery.

Pemaquid Point Lighthouse was originally commissioned in 1827 by John Quincy Adams and built that year. Due to poor workmanship (salt water was used in the mortar mix), the lighthouse began to crumble and was replaced in 1835.

Most lighthouses in the US were converted to the Fresnel Lens in the 1850’s, and Pemaquid Point received it’s lens in1856. The lens is one of only six Fresnel lenses still in service in Maine! 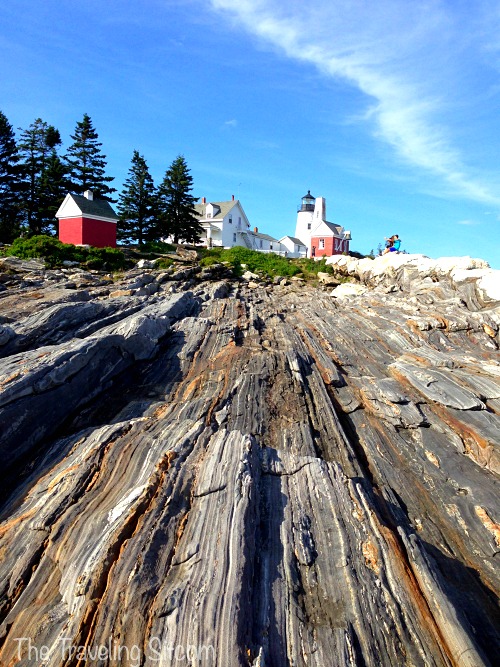 Pemaquid Point Lighthouse Park is managed by the Bristol Parks Commission.  And…it is the lighthouse on the Maine State Quarter, making it the first lighthouse to be featured on a piece of US currency! 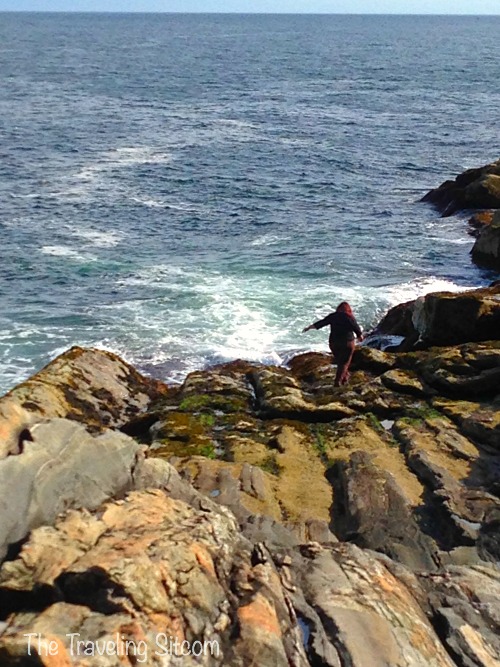 Coincidentally, this particular lighthouse is a top destination for weddings with its beautiful rocky cliffs and crashing waves.  The lighthouse is one of the most photographed on the Maine coast. 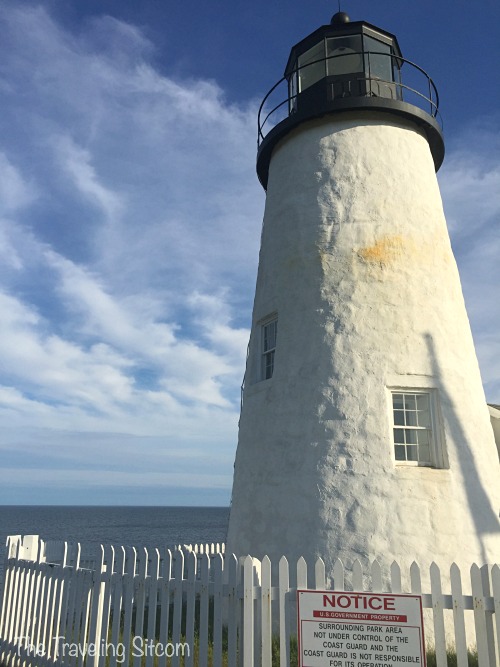 While taking photos, the whole scene seemed very familiar to me. 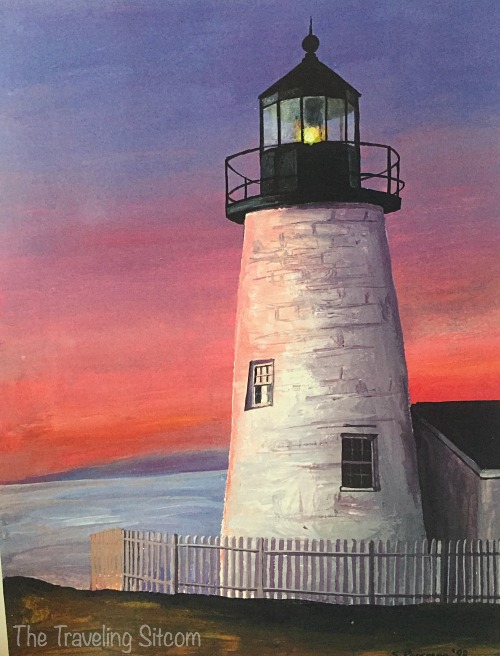 And then it occurred to me that I had painted the Pemaquid Point Lighthouse back in 1998 in a series of lighthouse paintings for a calendar!  It had hardly changed at all! 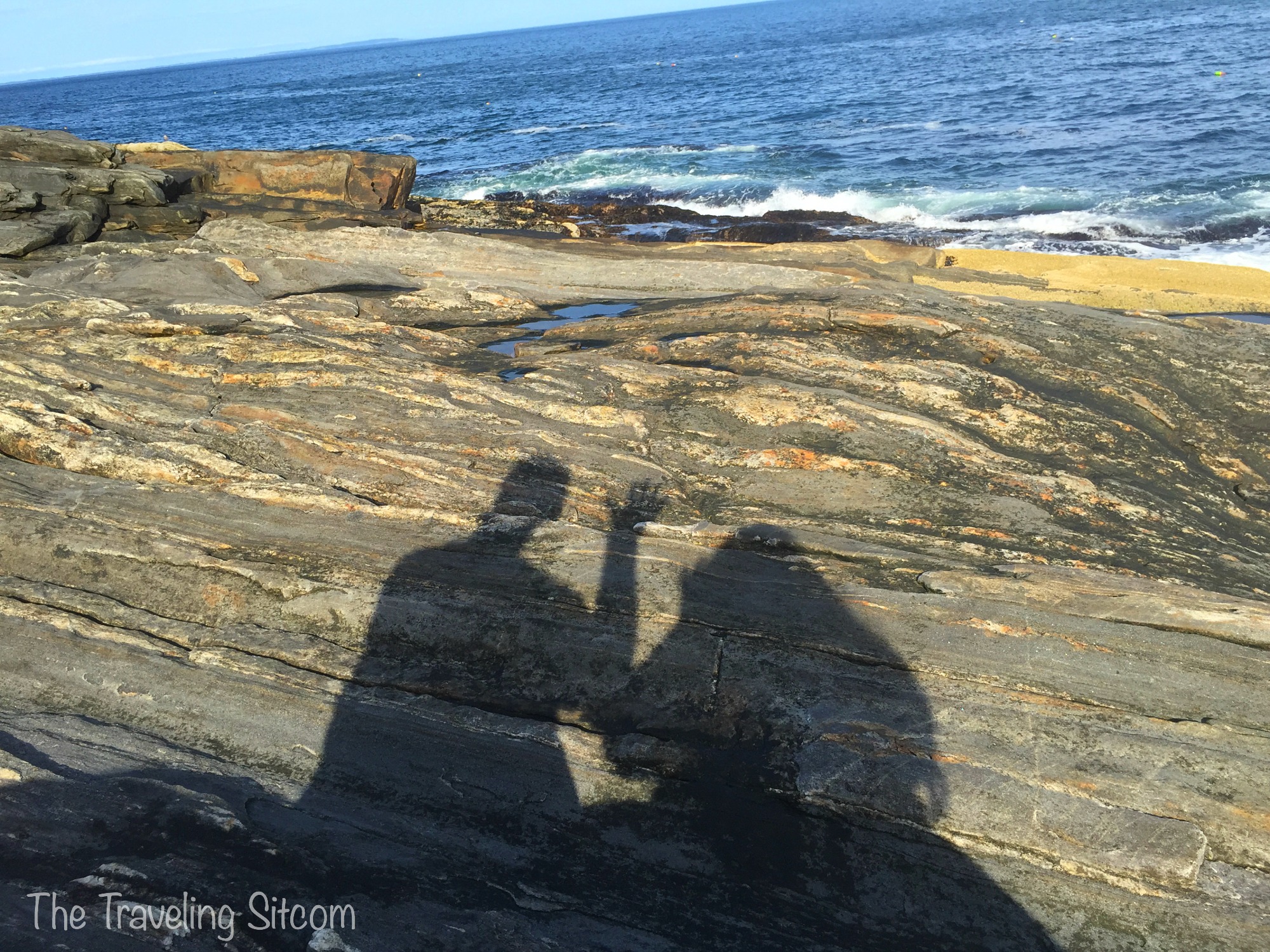 Beautiful rocky shores, deep blue waters and a setting sun make this trip totally worth it.  We were very glad that we decided to make the stop.

Our boring trip to Augusta turned out to be pretty fabulous. 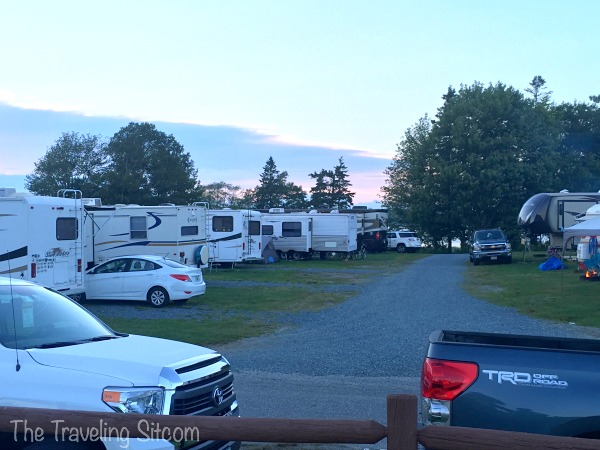 …and then we had to go back to work.  The park at Oceanside is full to capacity and has been so since the beginning of July.  The boss says excitedly that this is a record year.

We are just tired.  LOL! 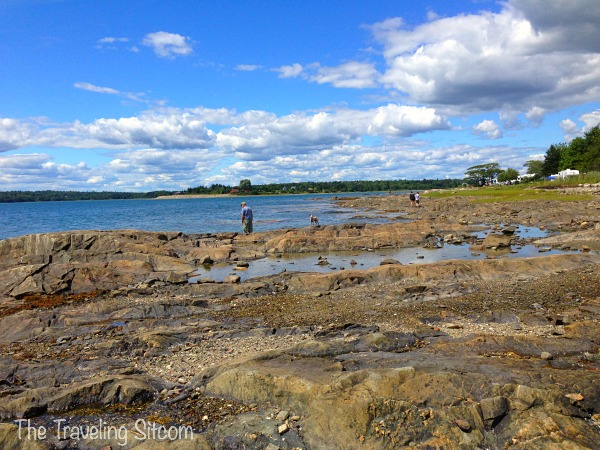 Of course, the campground still has it’s beautiful scenery to enjoy.  On our days off, we can wander about the rocks at low tide with the dogs and look for shells. 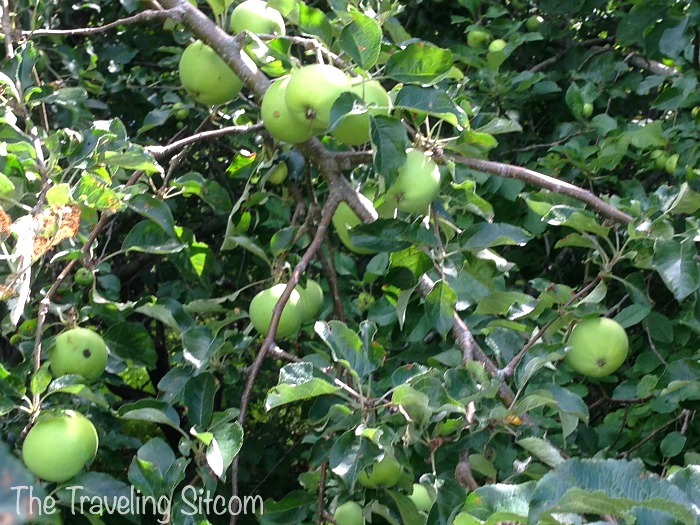 The summer here is nearing it’s end and the wild apple trees on the campground are just full of apples.  I was told that they make great pie, so I am waiting for them to ripen. 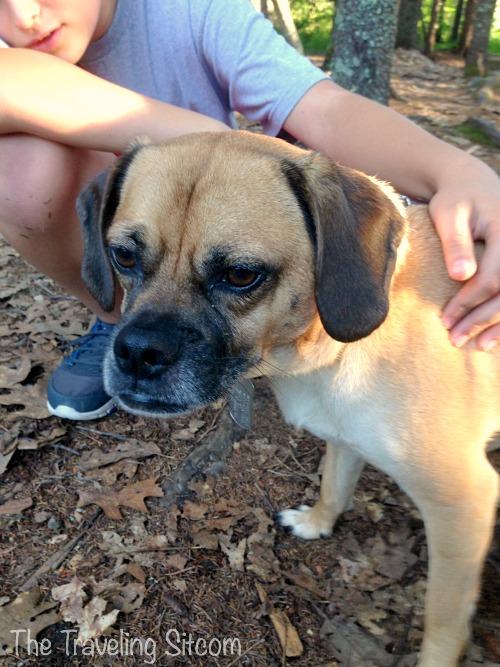 One of our guests had a dog that could have been Ralph’s twin. 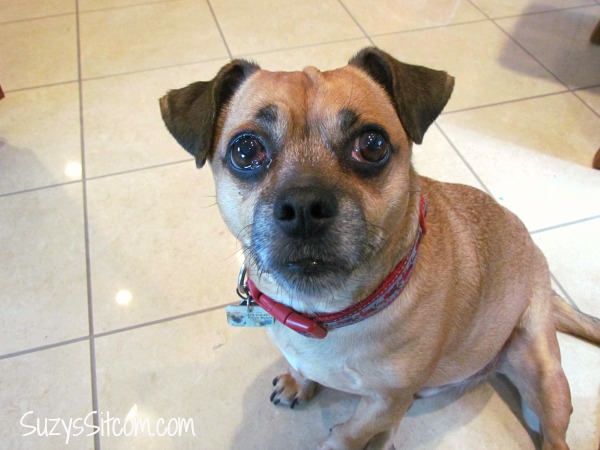 Ralph thinks he looks much younger and cooler, though. 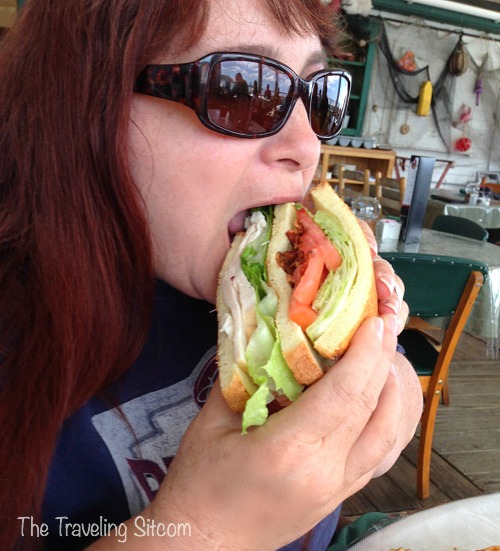 Oh…and in our down time, we apparently enjoy taking uncomplimentary photos of each other.  This is Dave’s take on my humongous BLT courtesy of one of the local restaurants… 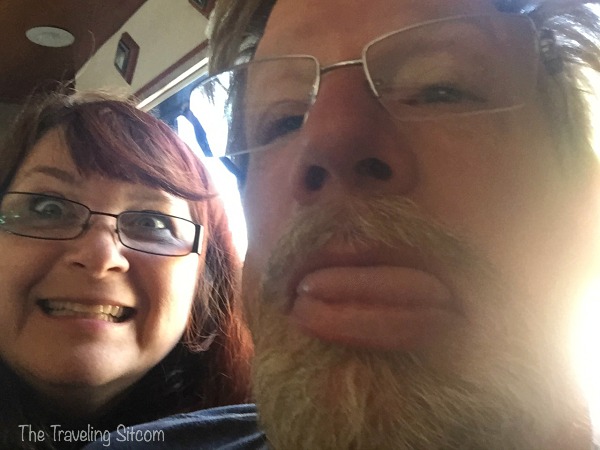 ….and a little morning scariness to keep it real.

Because life is a sitcom, right?

2 thoughts on “Pemaquid Point Lighthouse and life on the campground…”