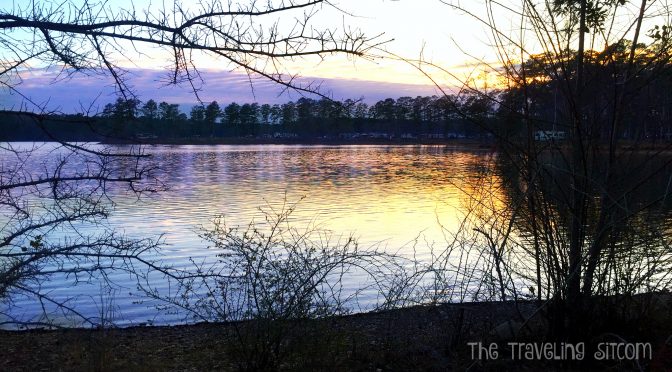 Every year, I like to take stock of the year before, looking at both the good and the bad.  As full time travelers, we get lots of questions about our life on the road.  This post might answer a few of those questions as we look back on the happenings of 2017. 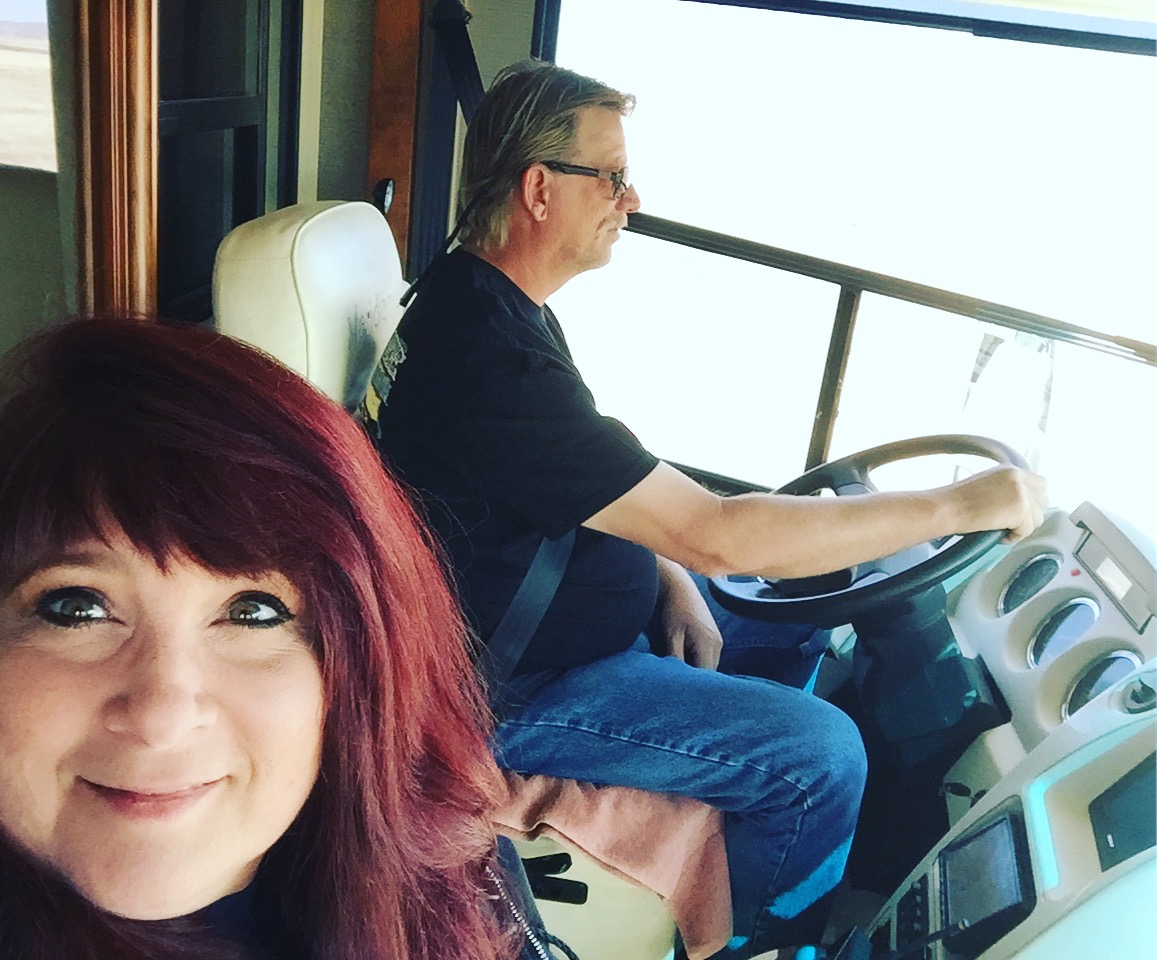 We get asked a lot if we will ever settle down again in a regular home.  At this point in time, we have no plans for that.  We have absolutely no regrets.  We love our new roaming lifestyle and the fact that as we work-camp across the country, we get to actually experience each area as the locals do.

We have been on the road since the spring of 2015.  If you would like to see reviews of our previous years:

The year 2016 brought us our first look at the state of Arizona.  We arrived there at the beginning of the summer, with the idea of checking out the Grand Canyon, and then moving on. 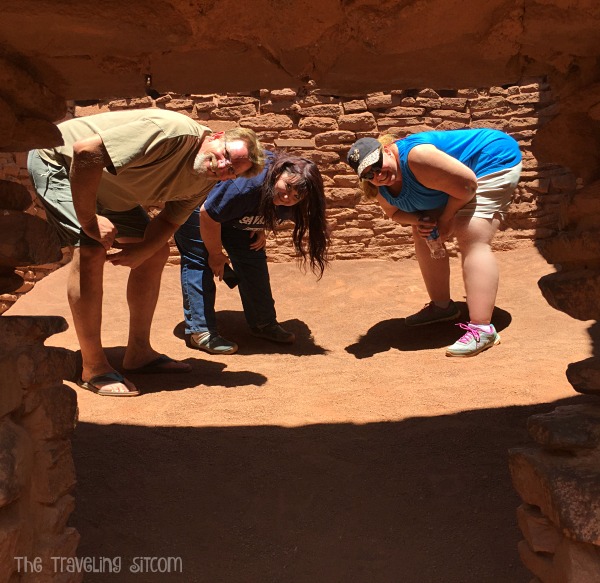 Arizona surprised us.  What a beautiful place to live!  It wasn’t just desert and cactus.  It was amazing vistas as far as the eye could see.

Our journey began with our first work camping job in Bar Harbor, Maine.  It was a time to begin decompressing from our city lifestyle and begin really enjoying life. 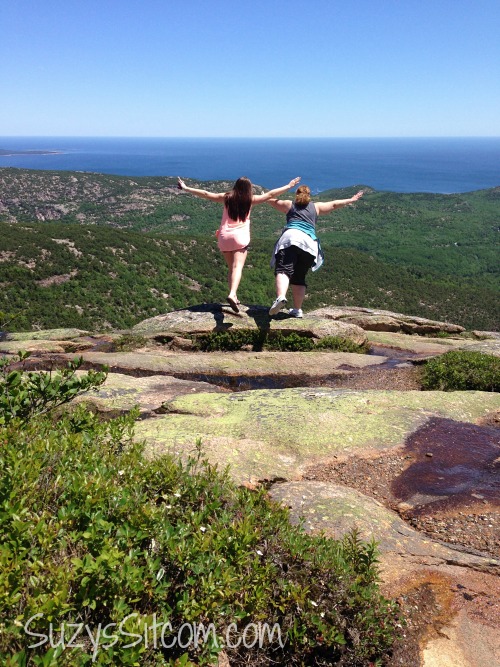 A Video of our Summer in Bar Harbor 2015

Many ask about our financials, so I will go into that a bit, along with a few things we have learned and experienced as we traveled in 2017!

We began 2017 working at the KOA in Tucson, AZ. Our job ended there in mid February.  At the time, we didn’t have anything lined up for late summer, but planned on spending time in Atlanta, GA for the birth of our first granddaughter.

So, we took a scenic trip from Tucson to Atlanta. 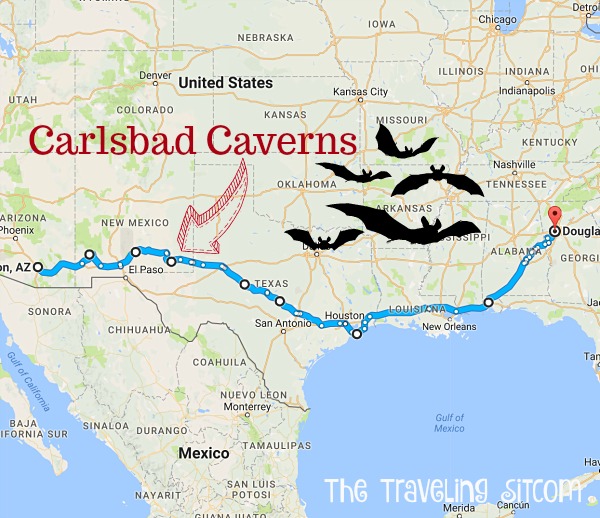 Our route took us to the White Sands National Monument, and Carlsbad Caverns in New Mexico.  Both of them are must-sees!  We then made our way through Texas with a nice stop in Galveston.  Our final destination was my daughter’s home in Douglasville, GA.  A total of around 2800 miles. 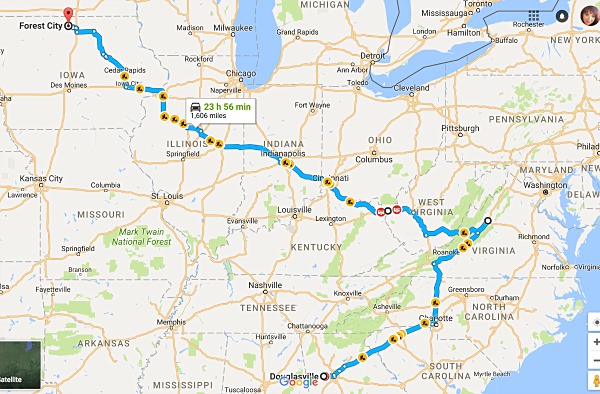 After the birth of our granddaughter, we managed to line up positions at the Boston Cape Cod KOA starting in July.

Here is where things went wrong.

Due to mechanical issues (that I will talk about later in this post), we ended up in Forest City, Iowa.  Above you can see our convoluted route, adding a total of 1600 miles onto our commute. 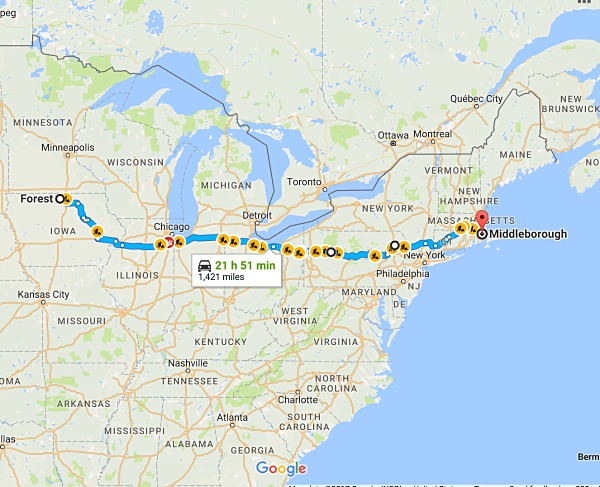 Once the coach was repaired, we made our way finally to Cape Cod to work out the rest of the summer.  We took a week or so on this route and actually enjoyed the scenery.  We did a fun stop at the Iowa 80 Truck Stop too. Total mileage on this leg- 1,421 miles. 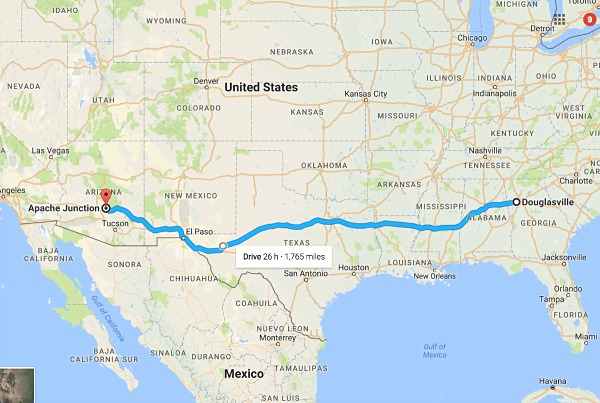 Our final two legs of the year took us from Boston/Cape Cod to Atlanta- 1200 miles, and then from Atlanta to Apache Junction, AZ- 1765 miles.

Our favorite campgrounds for 2017

With all the traveling that we did, we stayed at over 30 different campgrounds this past year.  Too many to list here.  But we want to talk about 4 campgrounds that stood out this year.  Our top four… 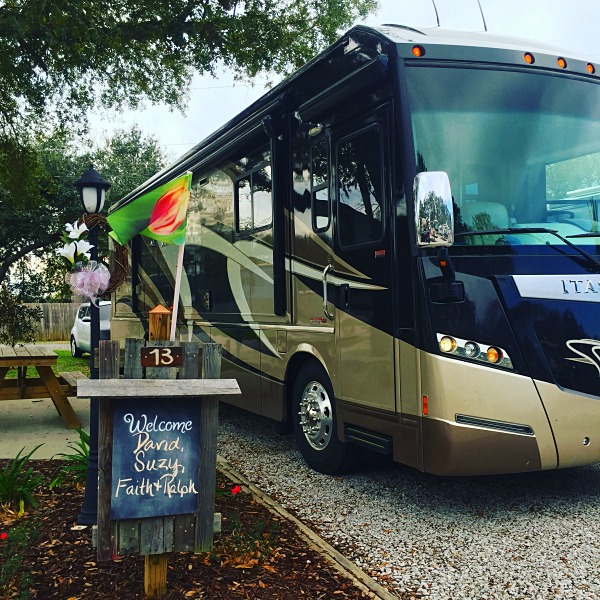 Our absolute favorite campground of 2017 is a tiny little RV Park in Mobile, Alabama called All About Relaxing RV Park.  We only got to stay there one night, but they left such a big impression that both of us named them right off when I started putting together this list.

Check out the welcome chalkboard in front of our site!  What a great way to start off!  The campground is small with roughly 40 sites, but well laid out, big rig friendly, a nice pool and amazingly nice laundry and bath house. 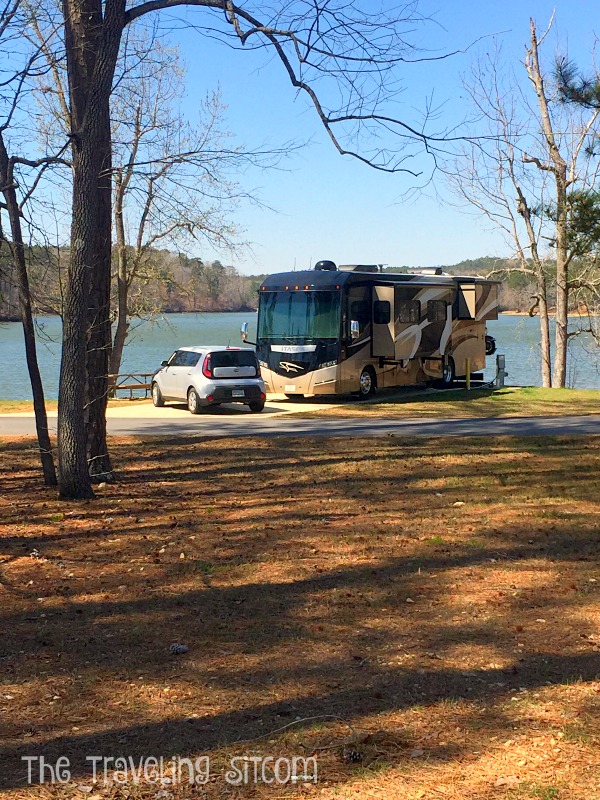 Perched along Lake Martin in north central Alabama, Wind Creek State Park was another of our favorite places this year!  We stayed in a brand new premium section of the park, right on the water.  Each site was large, with amazing views!  Definitely worth a return trip! 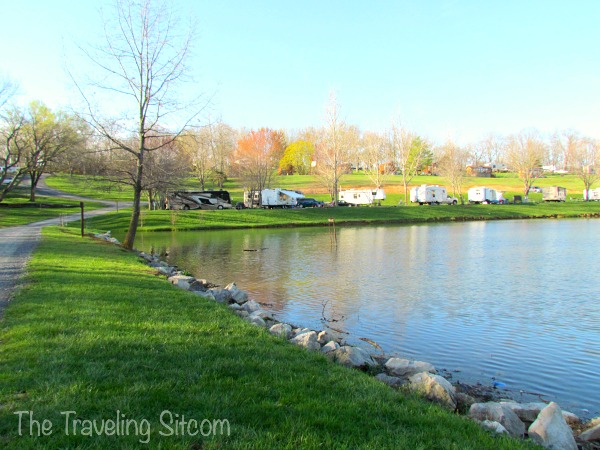 Located along near the beautiful Shenandoah Mountains in northern Virginia, Staunton Walnut Hills KOA has become a regular stop for us. We love the rolling green hills, the country feel and the huge lake!  This year marks third stay at this campground! 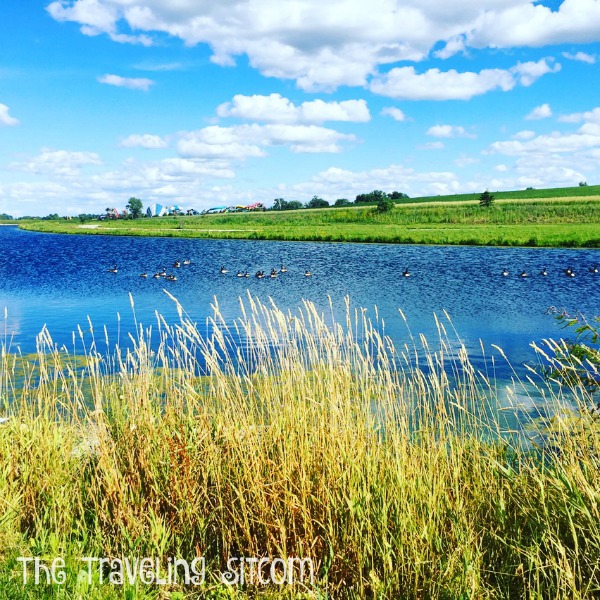 Finally, we have to mention Waterloo KOA in Iowa.  A big beautiful lake, surrounded by fields and fields of corn.  We loved the walking trail around the lake and the beautiful setting.  This is a definite stop if we end up in Iowa again.

The majority of our bills which include RV payment, health insurance, vehicle insurance, phone/internet bill, and all website overhead and taxes are covered by my websites, Suzy’s Sitcom and Daily Holiday Blog. 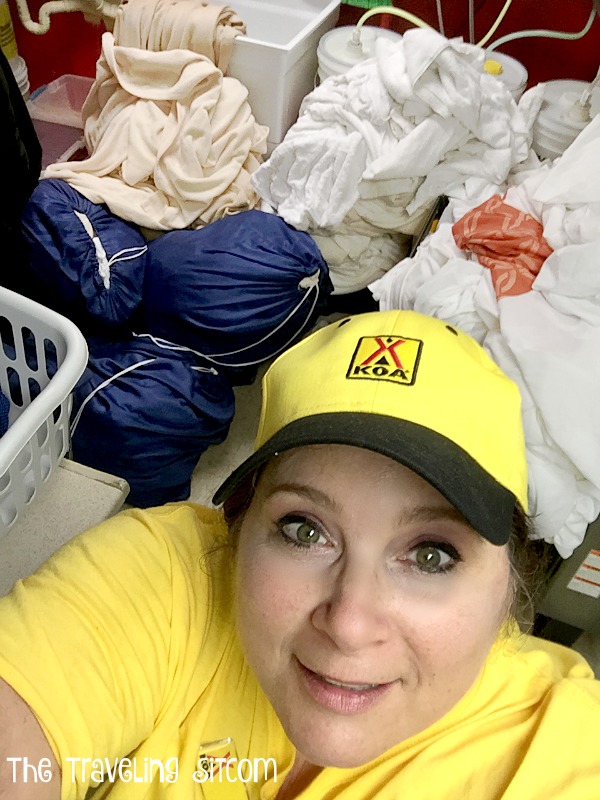 We use our work camping income to cover our food, gas and spending money.

This year, I was fortunate to take on a job for a group of campgrounds in Arizona who were needing a Social Media Director.  I am handling their websites, Facebook pages and newsletters and can do it from my coach wherever we might be.  They do require us to be in Arizona during the winter (their busy season).  So, it not only gave us another source of income, but a place to park our home in the winter! 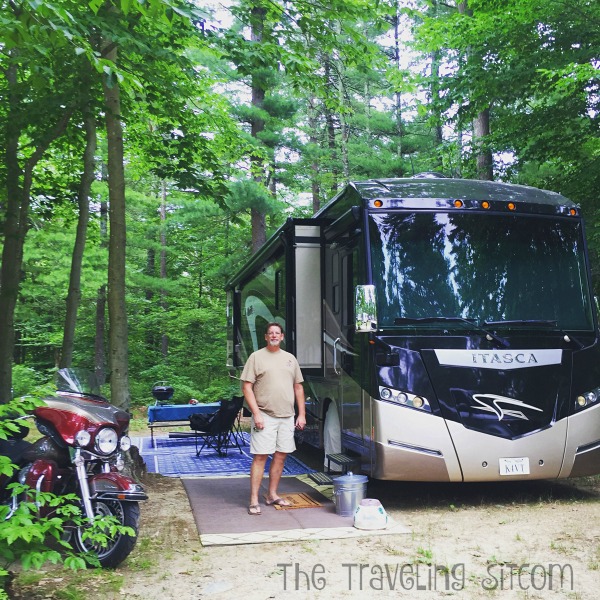 Aside from traveling expenses this year, our only other major expense was a new iPad and iPhone for Dave.  Seems that after a few years, they seem to have a self destruct button in them.  We finished paying off my phone a few months ago, so we are waiting for my button to go off.

I’d say LOL, but not really…

Mechanical and Coach Issues in 2017

Yep, it seems like every single year brings some mechanical issues for the coach, and 2017 was not different.  We started out the year with a scheduled maintenance in Atlanta to the tune of $1800.  Dave believes in maintenance in order to help avoid major issues. 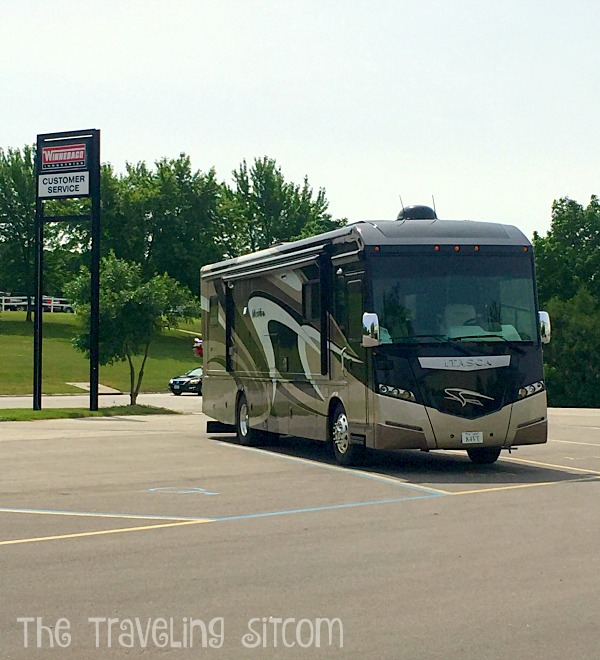 But major issues can happen anyway.  On our trip up to Cape Cod, our full wall slide failed for the second year in a row.  After some research, we decided to take the coach to the Winnebago Factory in Forest City, Iowa for the repair.  We wanted it done right and we had heard that they had come up with a new fix for this apparently common issue.

We spent about two weeks living in the Winnebago Factory parking lot.  We have to say that they were extremely nice, gave us a place to plug in, and were able to fix the slide under extended warranty. The repair included a whole new slide mechanism which we hope is our final solution.

And on the bright side, we got to check out Iowa for the first time. 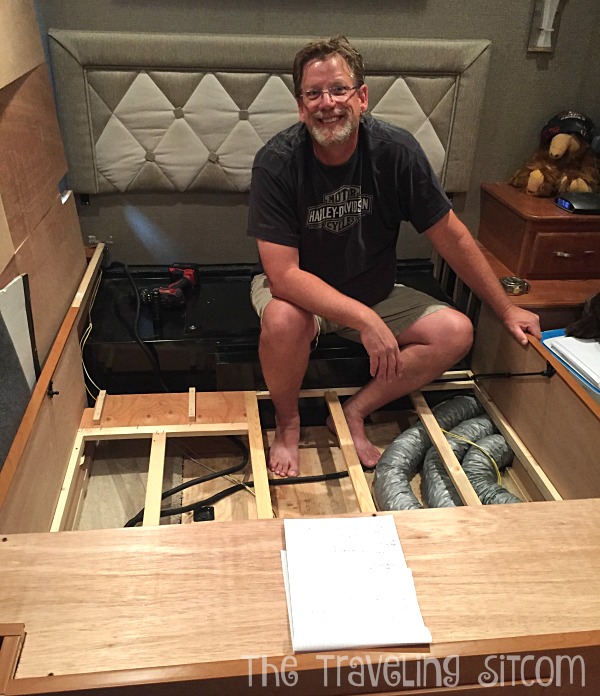 Dave busied himself with repairs that he could do on his own while we were there.  Someone’s big butt broke the bed.  That person shall remain nameless.

With the parts department right across the parking lot, things were quite convenient.

While in Boston/Cape Cod, we experienced our first hurricane while in the coach.  It was downgraded to a tropical storm by the time it got to us, but hurricane Jose managed to stay around for a couple weeks over the Boston area, giving us lots of rain and wind.

And one morning I woke up to find all the carpet in the coach soaked and wet.  We had a leak.  As it turned out, a large limb had fallen down and tore the awning over our slide out, revealing the hole for the locking mechanism.  And a river of water was coming through that hole onto my carpet.

It took weeks for me to dry out the carpet and several months for Dave to get all the parts he needed to make the repair to the awning.  In the meantime, we had to pull the slide in everytime it rained.  About $500 later, we now have a new slide awning.

Wiring Problem in the Steps

Driving down from Cape Cod to Atlanta, we stopped at a rest stop to walk the dogs and realized that the steps were out.  We were lucky that Dave hadn’t ran them into anything.  We could not get them to go in, so Dave had to crawl under the coach and disable them.  I handed him my duct tape and we taped the crap out of them.

Climbing in and out of the coach was rather hazardous for a while until we managed a few days later to fix the wiring.

Oh, and now the rear view camera seems to have its good days and its bad days.

There is always something….

Affiliate links to Amazon below:

Dave is a fan of gadgets and things that make our life on the road easier.  Here are a few that he found and bought this year: 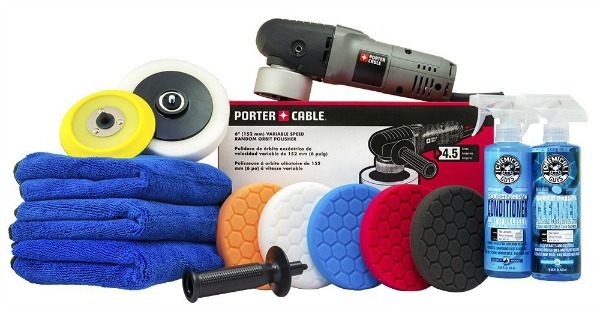 Dual Action Polisher and Detail Kit– because the coach needs to look nice and Dave loves to make it so. 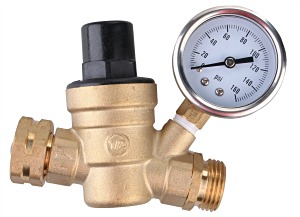 Adjustable Water Pressure Regulator The water pressure in Cape Cod was ridiculously high and they warned us about it when we got there.  High water pressure can burst your pipes if you aren’t careful, and we certainly didn’t want any new issues! 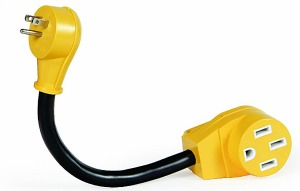 Electrical Adapter 15 AMP to 50 AMP which allowed us to maintain charge on batteries and keep the refrigerator running while the coach was parked in our daughter’s driveway.

Favorite sights we have seen this year

We have seen many sights this year and had lots of great adventures.  It’s pretty darn hard to narrow it down.  Here are a few of the many that stand out this year:

It has been a good year all in all, with lots of great memories!

We will be living and working in Apache Junction, AZ until April 1.  We are then going to take a trip across the country again to Atlanta to visit with the grand baby for a few weeks.  Because we have to have some grand baby time, of course!

We will be working the summer in Polson, MT, right on Flathead lake near the top of the state.  So another cross country trip will happen in early May from Atlanta to Montana.  We are scheduled to work in Montana until mid September.

After that, things are up in the air and plans are being made.

You never know what is around the next corner…