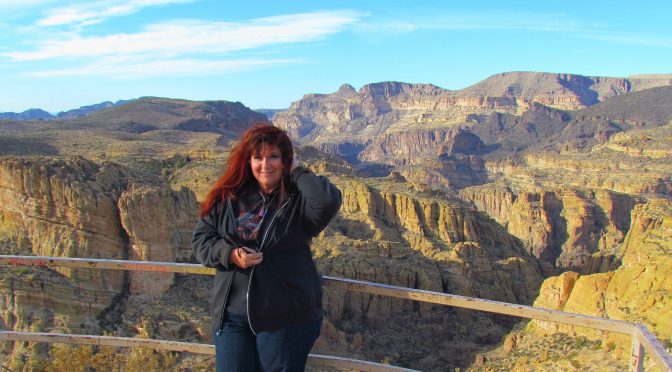 It’s been a busy season here in Apache Junction and with my new Social Media Director job, and six websites to maintain, I’m afraid I’ve fallen behind here on The Traveling Sitcom.  We will be here in Arizona for five more weeks and I hope to catch up on at least the highlights of this beautiful area over the next few weeks.

We are going to start with the amazingly beautiful Apache Trail. 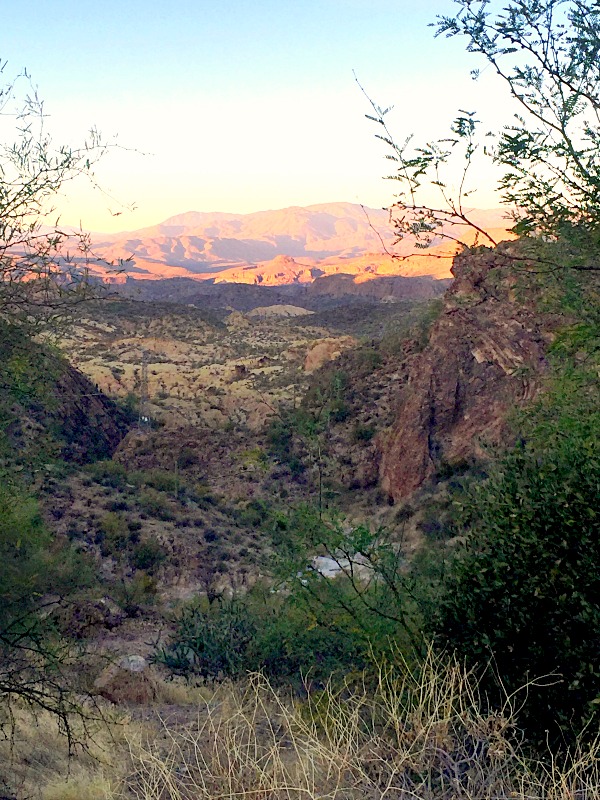 Yes, we are finding the time to explore.  After all, that is why we went into full timing in the first place.  The Apache Trail and Tortilla Flat were first on our list of must sees.  And apparently we liked them because we have driven this route several times now.

Named after the Apache Indians who once used this route,  the Apache Trail, or AZ 88 as it is officially known, links Apache Junction with Theodore Roosevelt Lake,  traveling through the Superstition Mountains and the Tonto National Forest.

Known as one of the ten most dangerous roads in Arizona, we had to check it out.

But before we hit the actual trail, we made one stop… 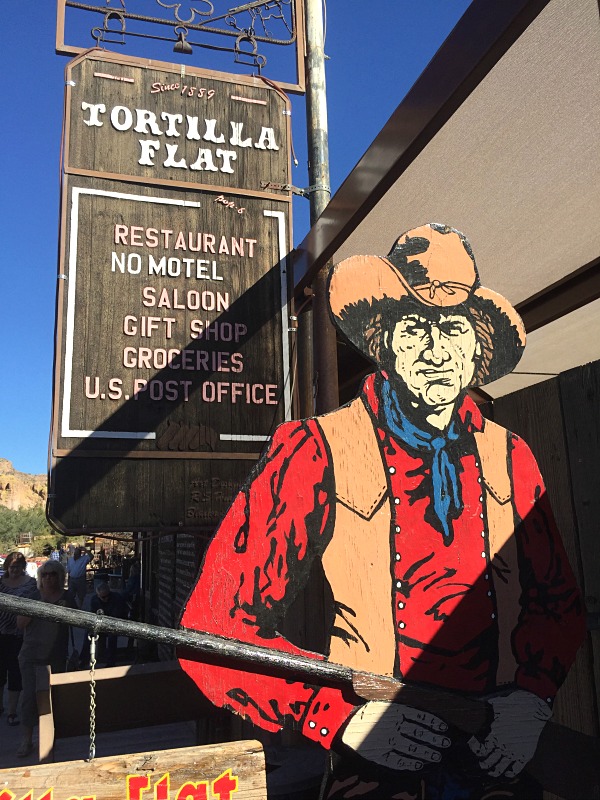 Tortilla Flat was originally a freight camp, home to a small community for years. Only a small part of the town remains, but what’s left is touristy Old West.

The town, population six, is Arizona’s smallest town with a post office as well as a voter’s precinct. 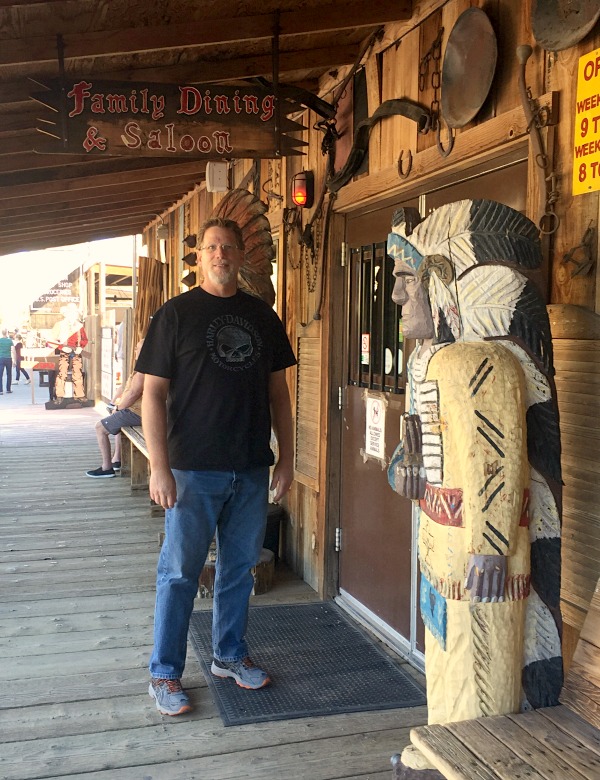 Quite literally, Tortilla Flat is just a wide spot in the road.  But we had heard a lot about it from those that visit here every year.  We were told to try the hamburgers at the restaurant there.  They were supposed to be epic.

Hamburgers, you say?  Well, we certainly needed to check that out.  I mean sometimes you have to make a few sacrifices in the name of tourism. 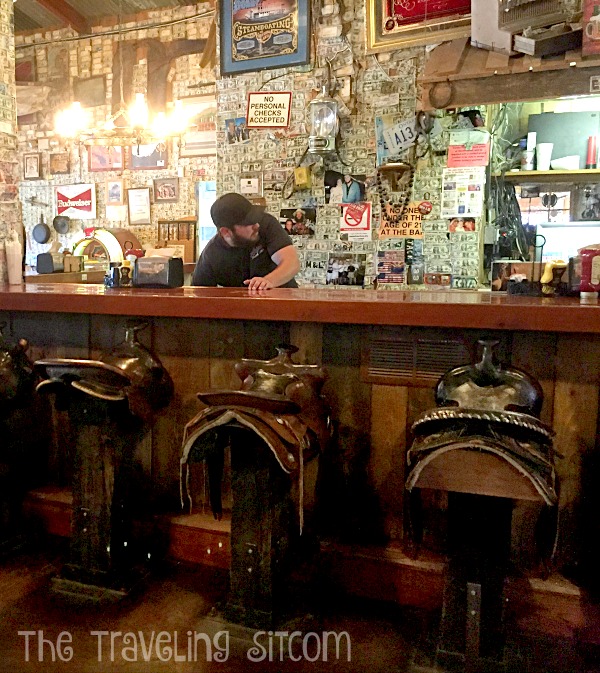 Walking into the Superstition Saloon and Restaurant is an adventure in itself.  The first thing you see (besides the kitchy saddle barstools) are thousands and thousands of dollar bills on every single wall and ceiling in the place.  According to our waiter, over 500,000 in dollar bills.

Interesting enough, this saloon was rebuilt after the 1987 fire which destroyed almost the entire town.   At that time, the saloon had been blanketed with dollar bills that burned with the building.

The tradition has lived on. 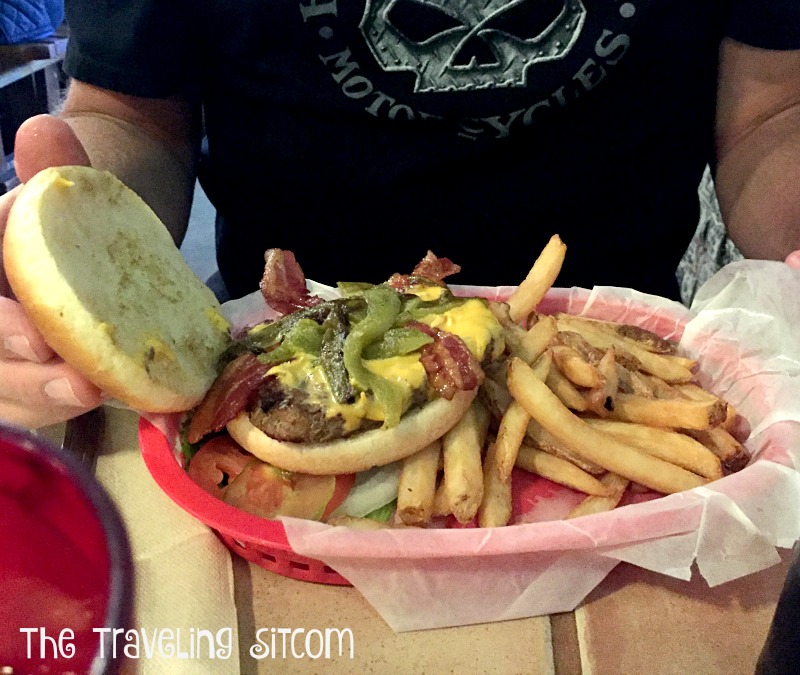 Okay, I’m sure you are wanting to know about the burger.  Yes, it was awesome.  We will be back. 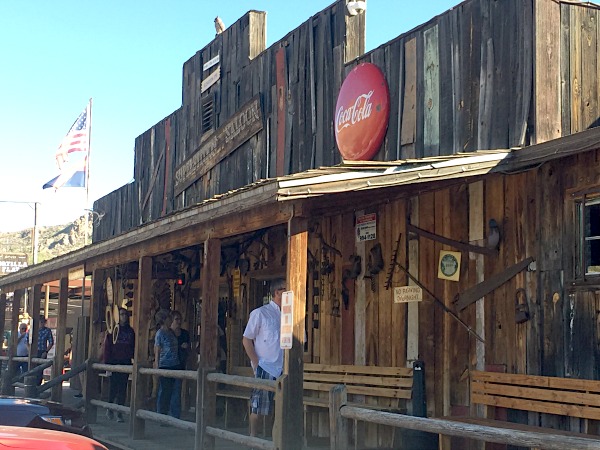 The rest of Tortilla Flat consists of an old one-room school house, an ice cream parlor, two gift shops and a post office.

We tried out the Prickly Pear Gelato before we left town.  An interesting flavor, similar to strawberry, but not as strong.  Not sure I’d get it again, but I can now say I had it.

And now to check out Apache Trail! 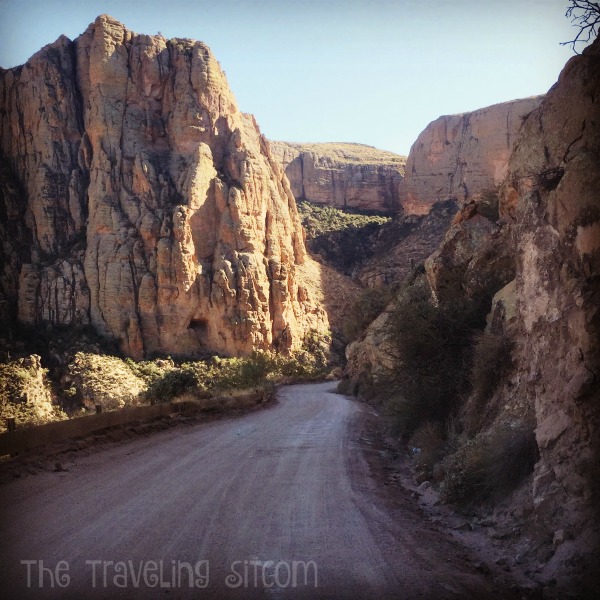 Armed with our maps and our sturdy KIA Soul, we ventured onward, determined to get a taste of this road that we had heard so much about.  We had pavement for a few miles past Tortilla Flat until we got to mile marker #220.

And then our adventure began.

We passed a scenic lake, took a few photos and at this point were not too intimidated by the road ahead. 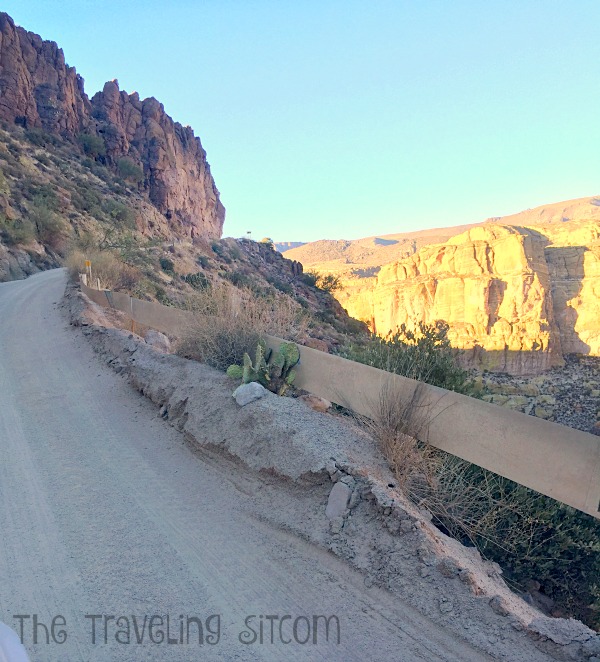 And then the hairpin turns and the switchbacks began.  Our little KIA climbed and climbed.  Rail guards were few and far between and in most instances as we climbed the narrow road, there was nothing between us and the edge of the cliff but a few feet of dusty road. 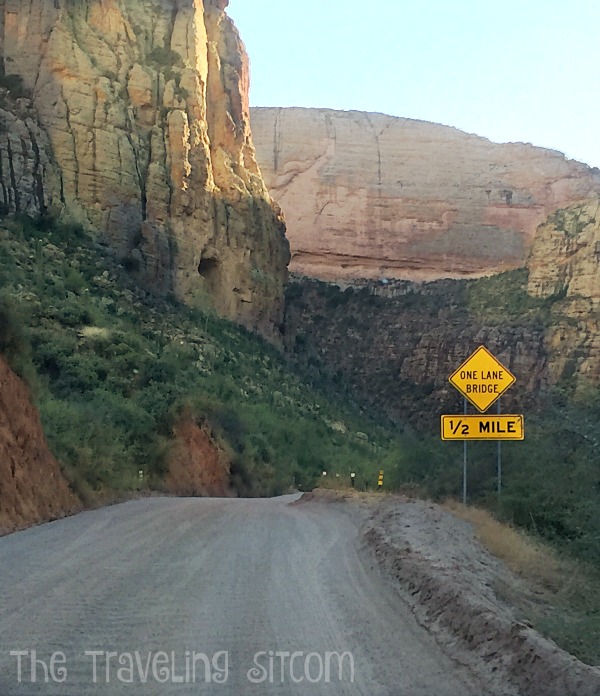 It may seem a little late to mention this, but your car should be in good working order before taking this trip. This is not an area that you want to break down in.  There are also restrictions on size and weight of vehicles on the Apache Trail. It is not recommended for RVs.

Our little KIA was not informed of this ahead of time.  We didn’t want it to freak out. 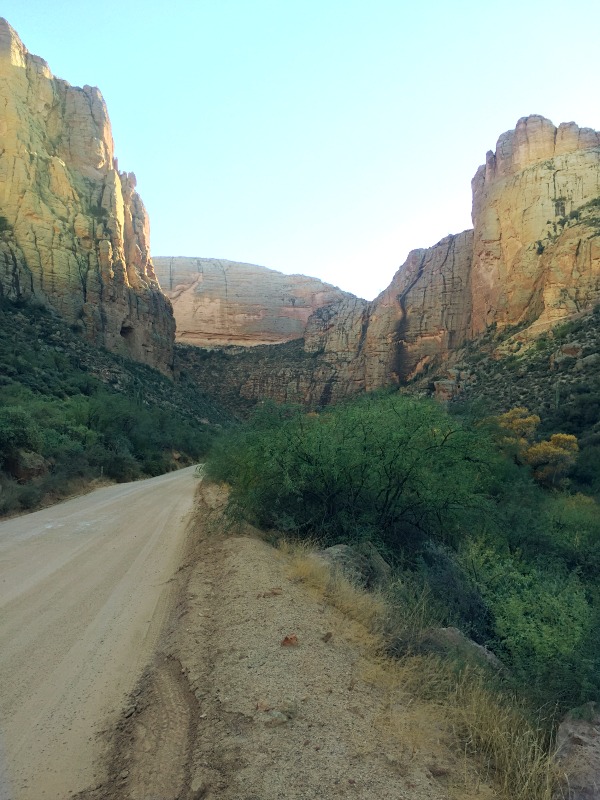 You see, there is no cell phone coverage here, and very little traffic.  Which is good in a way because the road is so narrow and every blind corner is an adventure in itself. 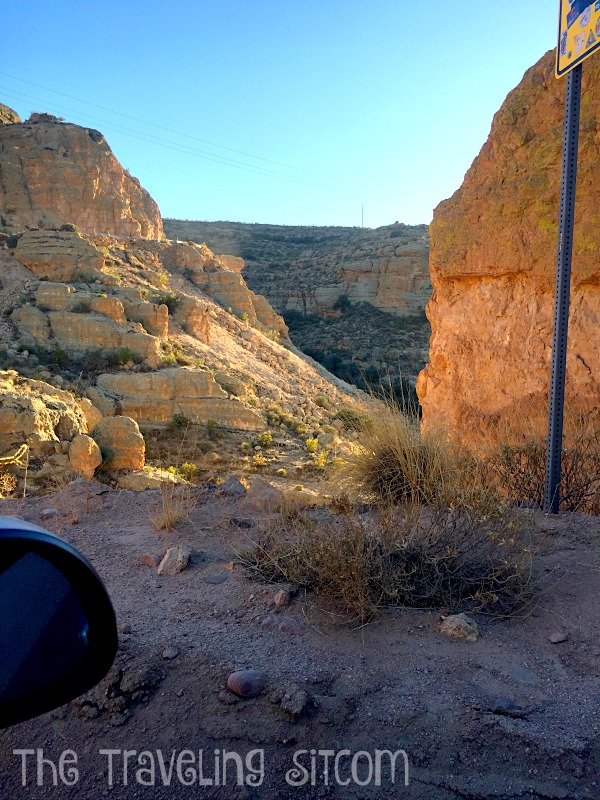 But the amazing scenery is worth the journey!  Every inch of it.  The forty mile route took us about 4 hours.  By the time we got to Roosevelt Dam, it was nearly dark.  And our KIA was no longer silver.  More of a muddy brown.

We have since taken this trip two more times.  The Apache Trail is a definite must do if you are in the area.  Put aside a day and check it out. 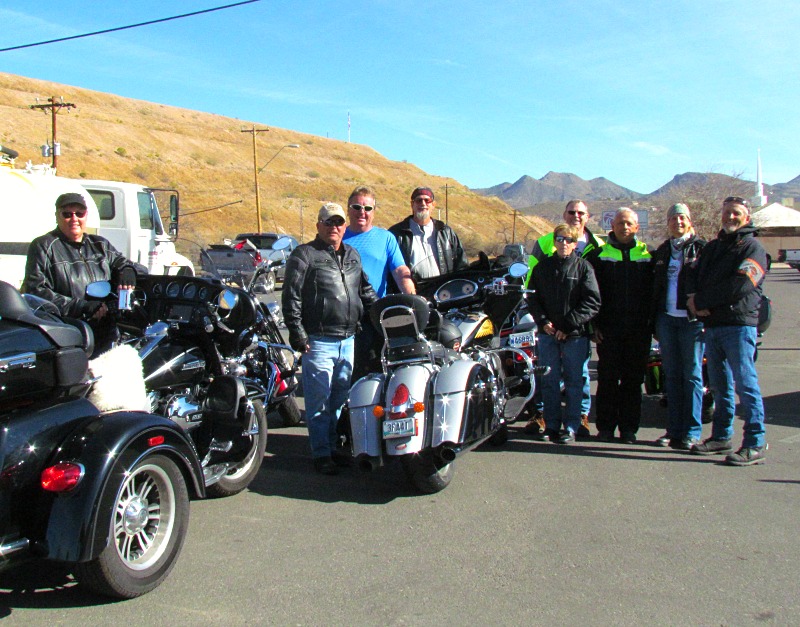 Another thing that has been keeping us busy this season is motorcycling with a group from the resort.  Turns out there are lots here that have motorcycles and about once a week somebody organizes a ride.

It’s the most use our motorcycle has gotten since we hit the road three years ago. 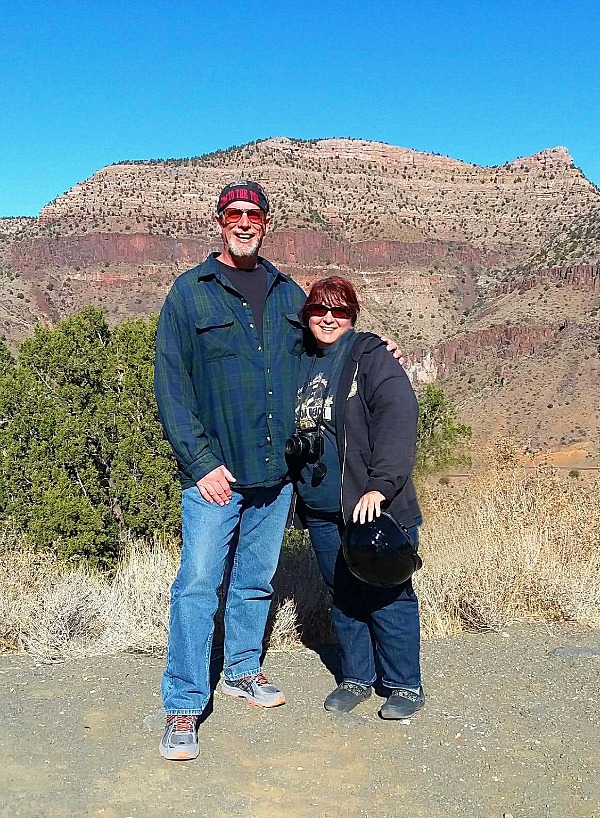 The desert offers so much to see.  I honestly never get tired of looking at the beautiful vistas.

I have lots more to show you and hope to share it over the next few weeks, so stay tuned!